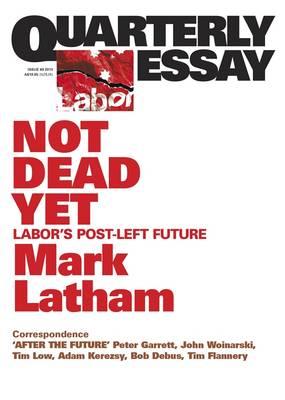 With an election looming and criticism of the ALP now a national pastime, Mark Latham considers the future for Labor. The nation has changed, but can the party?
With wit and insight, Latham reveals an organisation top-heavy with factional bosses protecting their turf. At the same time Labor’s traditional working-class base has long been eroding. People who grew up in fibro shacks now live in double-storey affluence. Families once resigned to a lifetime of blue-collar work now expect their children to be well-educated professionals and entrepreneurs.
Latham explains how Labor has always succeeded as a grassroots party, and argues for reforms to clear out the apparatchiks and dead wood. Then there are the key policy challenges: what to do about the Keating economic legacy, education and poverty. Latham examines the rise of a destructive and reactionary far-right under the wing of Tony Abbott. He also makes the case that climate change is the ultimate challenge - and even opportunity - for a centre-left party.
Not Dead Yet is an essential contribution to political debate, which addresses the question: how can Labor reinvent itself and speak to a changed Australia?
‘The grand old party of working-class participation has become a virtual party. In no other part of society…could an organisation function this way and expect to survive. This is the core delusion of 21st-century democracy, that political parties can fragment and hollow out, yet still win the confidence of the people.’ - Mark Latham.
$19.95Add to basket ›