Breakfast at Tiffany’s & Other Voices, Other Rooms: Two Novels 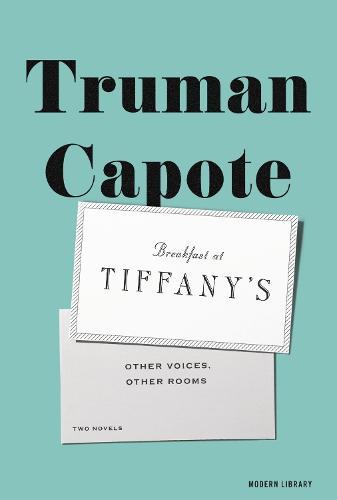 Breakfast at Tiffany’s & Other Voices, Other Rooms: Two Novels

Together in one volume, here are a pair of literary touchstones from Truman Capote’s extraordinary early career- the transcendently popular novella Breakfast at Tiffany’s and Other Voices, Other Rooms, the debut novel he published as a twenty-three-year-old prodigy. Of all his characters, Capote once said, Holly Golightly was his favorite. The hillbilly-turned-Manhattanite at the center of Breakfast at Tiffany’s shares not only the author’s philosophy of freedom but also his fears and anxieties. For Holly, the cure is to jump into a taxi and head for Tiffany’s; nothing bad could happen, she believes, amid that lovely smell of silver and alligator wallets. Other Voices, Other Rooms begins as thirteen-year-old Joel Knox, after losing his mother, is sent from New Orleans to rural Alabama to live with his estranged father-who is nowhere to be found. Instead, Joel meets his eccentric family and finds a kindred spirit in a defiant little girl. Despite its themes of waylaid hopes and lost innocence, this semiautobiographical coming-of-age novel revels in