World at Risk: The Report of the Commission on the Prevention of Weapons of Mass Destruction Proliferation and Terrorism 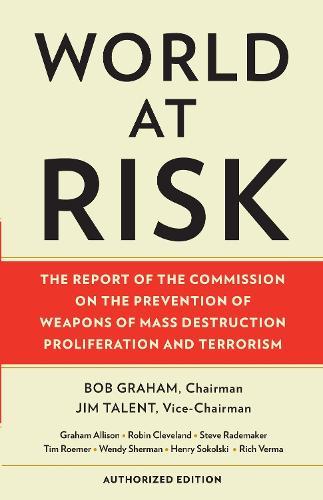 World at Risk: The Report of the Commission on the Prevention of Weapons of Mass Destruction Proliferation and Terrorism

The greatest danger of another catastrophic attack in the United States will materialize if the world’s most dangerous terrorists acquire the world’s most dangerous weapons. -The 9/11 Commission Report The bipartisan Commission on the Prevention of Weapons of Mass Destruction Proliferation and Terrorism was established by the U.S. Congress to build on the work of the 9/11 Commission by assessing our nation’s progress in preventing weapons of mass destruction proliferation and terrorism, and providing a roadmap to greater security with concrete recommendations for improvement. The Commission has interviewed over 200 experts inside and outside of government. They have met with counterterrorism and intelligence officials here at home and abroad who are working to stop proliferation and terrorism The Commission’s report examines the government’s current policies and programs, identifies gaps in our government’s prevention strategy and recommends ways to close them. The threat of terrorist attacks in the United States and elsewhere is still very real. The world remians at risk There is more that can and must be done. Our security depends on it.