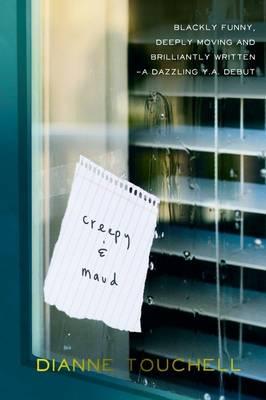 Hilarious and heartbreaking, Creepy and Maud charts the relationship between two social misfits, played out in the space between their windows. Creepy is a boy who watches from the shadows keenly observing and caustically commentating on human folly. Maud is less certain. A confused girl with a condition that embarrasses her parents and assures her isolation. Together Creepy and Maud discover something outside their own vulnerability - each other’s. But life is arbitrary; and loving someone doesn’t mean you can save them.
Creepy and Maud is a blackly funny and moving first novel that says; ‘You’re ok to be as screwed up as you think you are and you’re not alone in that.’

Creepy is not his real name – rather it’s the name that Maud, the girl next door, calls him. But then Maud is not her real name either, it’s just what Creepy calls her. Confused?

Well then, welcome to the worlds of Creepy and Maud.

Creepy watches Maud through her bedroom window which faces his, which is kind of creepy but also comforting to Maud who has a condition that not only embarrasses her family but also leaves her as a social misfit. Creepy’s interest helps her feel like less of an outcast, and when the two start to communicate via notes left on their windows they both realise that they’re not the only one with problems, and that neither is truly alone.

This wonderful story about two teenage misfits is both funny and heartbreaking, making you realise that sometimes just because you love someone doesn’t always mean that you can help them through everything.

Katherine Dretzke is a bookseller at Readings Hawthorne.

END_OF_DOCUMENT_TOKEN_TO_BE_REPLACED

A mesmerising selkie novel from multi-award winning, internationally acclaimed Australian author, Margo Lanagan - one of the most exciting voices in speculative fiction.

Hilarious and heartbreaking, Creepy & Maud charts the relationship between two social misfits, played out in the space between their windows. A blackly funny and moving first novel that says; 'You're ok to be as screwed up as you...

A remarkable and gripping story about one refugee boy on a desperate journey from Afghanistan, and the Australian boy who befriends him.