Domes of Fire: Book One of the Tamu 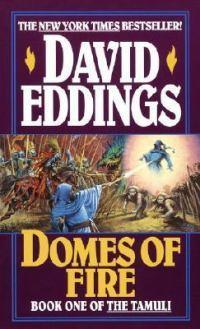 Domes of Fire: Book One of the Tamu

Six years had passed since the redoubtable knight Sparhawk had triumphed over the evil God Azash and returned to Elenia with Queen Ehlana, his bride. And now a new danger had arisen to threaten the peace of Ehlana’s realm. The trouble had started quietly. At home, bandits began to plague the hill country. In neighboring Lamorkand, the customary political unrest turned ominous with whispers that the bloody heroes of old soon would rise again. And travelers reported that the Trolls had all disappeared from the icy northern haunts of Thalesia. Simple problems, apparently unrelated - until an ambassador arrived from the far-off Tamul empire, begging Sparhawk’s aid. For these same dangers that stalked Ehlana’s kingdom had already struck his realm full-force. The fabled ancient warriors of Tamuli had indeed returned - intent on carnage. Monsters and fell magics had followed, and the havoc and terror they spawned were tearing the empire apart. The empire had sent for the Pandion Knight who had killed the God Azash. If Sparhawk wanted to stop this danger before it could savage his own land, he now must lend his aid. Sparhawk, Ehlana, and their daughter, Princess Danae, agreed to make the grueling trek to the far-distant empire of the east. They traveled in company with a handful of trusted companions: the stalwart champions of the four Militant Orders, the knight Berit, Mirtai the giantess, and the young thief Talen. With the child-goddess Aphrael to speed their journey, they began the treacherous traverse of the utmost reaches of the Daresian continent, to Tamul’s distant capital. There, in the emperor’s glittering court, they would encounter corruption, treachery - and a greater danger thanany man had faced before! David Eddings opens a bold new chapter in the saga begun in his bestselling series, The Elenium. In his dazzling trademark style, Eddings weaves a compelling tale of strange magic and breathtaking adventure, staunch friends and deadly enemies. Domes of Fi