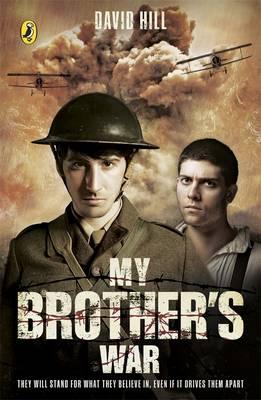 My Brother’s War is award-winning children’s author David Hill’s compelling novel about the First World War. It sets brother against brother in a clash of ideals that lead both to the battlefields of France to face the test of their lives. WINNER OF THE JUNIOR FICTION AWARD AND CHILDREN’S CHOICE JUNIOR FICTION AWARD New Zealand Post Book Awards for Children and Young Adults 2013 WINNER OF THE LIANZA LIBRARIANS' CHOICE AWARD 2013 STORYLINES NOTABLE BOOK AWARD 2013 IBBY HONOUR LIST 2014 ‘…there are stories that need to be told over and over again, to introduce a new generation of readers to important ideas and to critical times in their country’s history…Hill’s descriptions of trench warfare are unforgettable.’ from the Judges' Report of the New Zealand Post Book Awards for Children and Young Adults 2013 ‘…this is an important and highly readable book.’ NZ Listener My Dear Mother, Well, I’ve gone and done it. I’ve joined the Army! Don’t be angry at me, Mother dear. I know you were glad when I wasn’t chosen in the ballot. But some of my friends were, and since they will be fighting for King and Country, I want to do the same. It’s New Zealand, 1914, and the biggest war the world has known has just broken out in Europe. Williameagerly enlists for the army but his younger brother, Edmund, is a conscientious objector and refuses to fight. While William trains to be a soldier,Edmund is arrested. Both brothers will end up on the bloody battlefields of France, but their journeys there are very different. And what they experience at the front line will challenge the beliefs that led them there. A compelling novel about the First World War for 9-12 year olds.