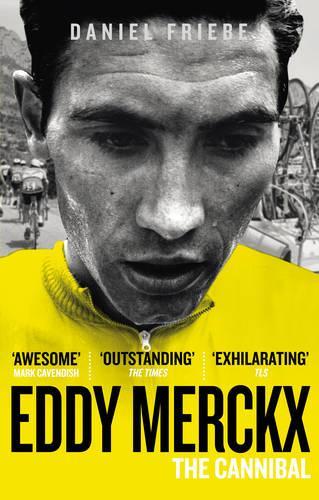 The first definitive story of the greatest cyclist of all time ‘The whole point of a race is to find a winner… I chose to race, so I chose to win.’ For 14 years between 1965 and 1978, cyclist Edouard Louis Joseph Merckx simply devoured his rivals, their hopes and their careers. His legacy resides as much in the careers he ruined as the 445 victories - including five Tour de France wins and all the monument races - he amassed in his own right. So dominant had Merckx become by 1973 that he was ordered to stay away from the Tour for the good of the event. Stage 17 of the 1969 Tour de France perfectly illustrates his untouchable brilliance. Already wearing the yellow jersey on the col du Tourmalet, the Tour’s most famous peak, Merckx powered clear and rode the last 140 kilometres to the finish-line in jaw-dropping solitude, eight minutes ahead of his nearest competitor. Merckx’s era has been called cycling’s Golden Age.It was full of memorable characters who, at any other time, would all have gone on to become legends. Yet Merckx’s phenomenal career overshadowed them all. How did he achieve such incredible success? And how did his rivals really feel about him? Merckx failed drug tests three times in his career - were they really stitch ups as he claimed? And what of the crash at a track meet in Blois, France that killed Merckx’s pacer Fernand Wambst, which Merckx claimed deeply affected him psychologically and physically? Or the attack by a spectator in 1975? Despite his unique achievements, we know little about the Cannibal beyond his victories. This will be the first comprehensive biography of Merckx in English, and will finally expose the truth behind this legendary man.