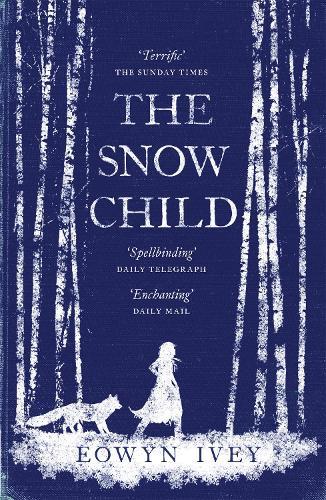 Finalist for the Pulitzer Prize 2013.
A bewitching tale of heartbreak and hope set in 1920s Alaska, The Snow Child was a bestseller on hardback publication, and went on to establish itself as one of the key literary debuts of 2012, and was a Richard and Judy Bookclub pick.
Alaska, the 1920s. Jack and Mabel have staked everything on a fresh start in a remote homestead, but the wilderness is a stark place, and Mabel is haunted by the baby she lost many years before. When a little girl appears mysteriously on their land, each is filled with wonder, but also foreboding: is she what she seems, and can they find room in their hearts for her?
Written with the clarity and vividness of the Russian fairy tale from which it takes its inspiration, The Snow Child is an instant classic.

Exactly a year ago, I discovered a novel that would be among my favourites of 2012 – David Vann’s Caribou Island, about a marriage put under the microscope by the isolation and intensity of the Alaskan wilderness. Coincidentally, this month I was captivated by Alaskan author/bookseller Eowyn Ivey’s debut novel, The Snow Child, a very different book that nevertheless resonates with some significant echoes – namely, that recurring central theme, but also the way it simultaneously evokes and debunks the romance of Alaska, an exotic location for most readers.

The Snow Child is a contemporary riff on a Russian fairytale about an old couple unable to have a child. One day, they create a snow child, who comes to life, but is as elusive and fragile as snow, with predictably tragic results. Ivey’s fiftysomething couple, Jack and Mabel, have moved to Alaska as ‘homesteaders’ (farming pioneers) to flee the grief of a miscarriage, but their idealised dreams of a clean slate and a benign, yielding wilderness meet with a ‘different truth’, as Jack observes. (‘Alaska gave up nothing easily.’) When they report seeing a child in the snow, the couple’s sceptical neighbour Esther warns them that the harsh environment can make people ‘start seeing things you’re afraid of … or things you’ve always wished for’.

Like all the best stories with a magical or supernatural element, Ivey keeps the reader guessing throughout as to what is real and what is imagined, or projected. And one of the aspects that makes the novel so absorbing is the blend of stark realism and enchantment in her prose. Early on, the weather is described as ‘so cold the dirty dishwater turned to ice in the air when you tossed it out’. Later, the child is ‘dusted in crystals of ice as if she had just walked through a snowstorm or spent a brilliantly cold night outdoors’. Best of all, though, the characters are beautifully realised and satisfyingly nuanced, making us care desperately about what happens to them. This book kept me up all night until I finished it.

Jo Case is the outgoing editor of the Readings Monthly.

END_OF_DOCUMENT_TOKEN_TO_BE_REPLACED

Alaska, the 1920s. Jack and Mabel have staked everything on a fresh start in a remote homestead, but the wilderness is a stark place, and Mabel is haunted by the baby she lost many years before. When a little girl appears...