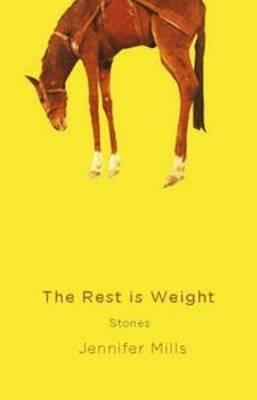 A girl searches for her lost grandmother while her parents quarrel at home. A young architect finds herself entangled by a strange commission. A man contemplates inertia after toxic fallout changes life in a remote Australian town. A woman imagines a mother’s love for her autistic son. The award-winning stories in The Rest is Weight reflect Jennifer Mills' years in Central Australia, as well as her travels to Mexico, Russia and China. Sometimes dreamy and hypnotic, sometimes dark, comic and wry, Mills weaves themes of longing, alienation, delusion, resilience, and love. Collected or on their own, these stories are both a joy and wonder to read. ‘Shifting effortlessly from the naturalistic to the deeply surreal, these stories conjure a whole sensory universe and the exiles who inhabit it with images that lodge in your hear and just won’t leave. Mills’ precision is breathtaking.‘ Cate Kennedy Praise for Jennifer Mills 'Clearly a talent.’ Australian Book Review ‘Highly original.’ Sydney Morning Herald ‘Brilliant.’ Bookseller + Publisher

One of the problems with many short story collections – particularly those that gather together the disparate works of a single author over time – is the tendency to repeat the same few notes. Finding one’s voice, or fine-tuning a tried and true formula over several different publications, can lead to a dangerous sense of repetition when amassed together in novel-length.

Jennifer Mills is the author of several books – including Gone (2011) and The Diamond Anchor (2009). The Rest is Weight casts a wide net, pulling together stories from venerated publications such as Overland, Meanjin and Black Inc’s Best-ofs over the years, and it’s a sign of Mills’s strength as a writer, and the breadth and courage of her range, that the collections falls into none of these common traps.

Rather, this is a publication that leaps from perspective to perspective in octaves. We open with the haunting story of a young boy and his quiet empathy both for the horses in his care and the criminal in their midst, the telling managing to be both contemporary, mournful and archaic at the same time. The concluding piece couldn’t be further from this beginning – a Russian cloud-seeding pilot seeking to atone for his last mistake – in a story that walks to the edge of futurism and back again.

Between these brackets we are taken from Beijing to Shanghai, from urban Adelaide to rural Australia, from Russia to the desperate borders of Mexico. Mills has travelled widely, including taking part in an Asialink residency in Beijing in 2010, and currently lives in South Australia.

Her background as a poet also comes through strongly. There’s a precision and coolness to the words, as well as a palette of moods and tones, that go towards creating beautifully varied worlds. Several of the stories read more like vignettes – tiny glimpses of a life or slice of time: cowboys, performers and feathered boy-angels in ‘The taxi driver’; oxygen tanks, abandoned sons, hatchbacks and quiet suburban imaginings in ‘The air you need’; troopers, rifles, ropes, tobacco and wine in ‘Look down with me’.

Yet the stronger pieces are undoubtedly those that combine this flair with narrative weight: ‘Aperture’, which follows the gradual drifting apart of a mixed-raced couple in modern China, ‘The jungle will swallow anything’, about a young girl’s awakening to a much more adult world as she observes her mother and her clients at a roadside diner, and ‘The milk in the sky’, the saddest story of two women and the reasons they break apart.

Incidentally, Mills has recently been announced as the new fiction editor of Overland, a welcome move and perhaps another indication of the vitalness of our independent journals and anthologies to the growing and supporting of the local writing scene.

With a sharp eye for the ridiculous, El-Zein's collection cleverly illuminates stereotypes and contemplates global truths. These are worldly stories in the best sense, and wise ones.

A man turns up at his daughter's birthday party with a goldfish in an ice-cream container. On the way to collect firewood, a woman and her teenaged neighbour crash in a snowstorm. An unwilling son helps his sister and father put...