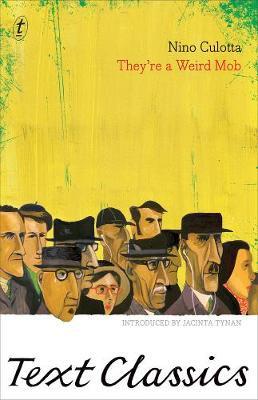 Introduced by Jacinta Tynan Who the hell’s Nino Culotta. That’s what you asked yourself when you first picked up this book, wasn’t it? Well I’m Nino Culotta. My father baptised me Giovanni - John - well Giovannino is like Johnny, and Nino is an easier way of saying it. Or a lazier way, if you like. Just off the boat from Italy - the north - Nino Culotta arrives in Sydney. He thought he spoke English but he’s never heard anything like the language these Australians are speaking. They’re a Weird Mob is an hilarious snapshot of the immigrant experience in Menzies-era Australia, by a writer with a brilliant ear for the Australian way with words. www.textclassics.com.au

In a way, They’re a Weird Mob reads just as much as a love-letter to the Australian language as it does as a paranorma of immigration and culture-shock in 1950s Sydney.

Nino Culotta, both narrator and apparent author of the novel, travels from northern Italy on an assignment from his boss – to ‘write about what kind of people these Australians are’ for publications back home. To do so, he bunkers down at a hotel in Kings Cross and eventually lines up a job as a bricklayer so that he can get to know ‘Working Australians’.

While Nino speaks almost perfect textbook English, the catch, as he soon discovers, is that most Australians do not. Rather, they appear to converse in a kind of ‘Australianese’, a mish-mash of flattened vowels, strung-together words, slang and subtle quirks of literalism. Nino can barely understand a word of it. Naturally, this leads to all sorts of misunderstanding and mischief. They’re a Weird Mob could easily be viewed as linguistically comedy of sorts, and indeed in this vein it’s as observant and wry as ever, putting a mirror just how impenetrable an exaggerated local dialect can be.

Nino, for instance, listening to a group of lifeguards at Bondi (‘Wot about Marouba last Sundy? All on ‘e says, an’ falls for it himself. Comes up blue in the face, spittin’ sand an’ seaweed’) decides that they ‘must be speaking the technical language of lifesavers’, which he himself should quickly learn. There’s also a real sense of charm and affection as Nino befriends his workmates, Joe, Dennis, Pat and Jimmy, who he finds to be ‘[s]trangely profane and cynical and abusive, but basically such good men, delighting in simple pleasures’.

As far as the immigrant experience goes, the novel is a light-hearted take, and very much of its time (They’re a Weird Mob was originally published in 1957). There are moments that go towards demonstrating the hypocrisy of casual racism. Nino rides a train next to a man who begins yelling obscenities at a nearby Italian family, who in turn mistakes Nino for ‘an Australian’ due to his northern features and begins complaining to him about ‘[b]loody dagoes’. However, in the end, Nino assimilates easily, and the last chapter, which preaches for ‘New Australians’ to get out there and embrace the local way of living, of ‘[which] there is no better’, and not cleave to their own language and customs, seems incredibly and unfortunately dated.

Another layer to this is that Nino Culotta is in fact not Nino Culotta at all, but the pseudonym of Australian Jack O’Grady (pictured left), who wrote They’re a Weird Mob on a bet. According to Jacinta Tynan’s introduction, O’Grady’s younger brother Frank, himself an author of historical novels, put £10 on the fact that John wouldn’t be able to write any sort of book and get it published. John then spent six weeks penning the manuscript, inspired by the time he spent on a building site where he found he could barely understand a word of the ‘Australianese’ spoken there, and as well by the Italian lessons he had recently been taking from his local barber. They’re a Weird Mob was submitted to publisher Ure Smith by his son, and went on to sell around a million copies, before falling out of print thirty-eight years later.