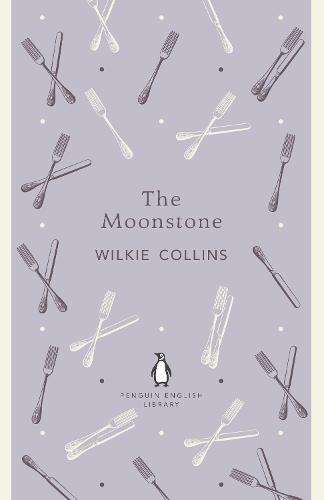 Launching a major new paperback series- Penguin English Library The Penguin English Library Edition of The Moonstone by Wilkie Collins'Here was our quiet English house suddenly invaded by a devilish Indian Diamond - bringing after it a conspiracy of living rogues, set loose on us by the vengeance of a dead man'When Rachel Verinder’s birthday present - the Moonstone, a large Indian diamond - is stolen at her party, suspicion and the diamond’s mysterious curse seem set to ruin everyone and everything she loves. Only Sergeant Cuff’s famous detective skills offer any hope of peace and a future for them all. The intricate plot and modern technique of multiple narrators made Wilkie Collin’s 1868 work a huge success in the Victorian sensation genre. With a reconstruction of the crime, red herrings and a ‘locked-room’ puzzle, The Moonstone was also a major precursor of the modern mystery novel.The Penguin English Library - 100 editions of the best fiction in English, from the eighteenth century and the very first novels to the beginning of the First World War.