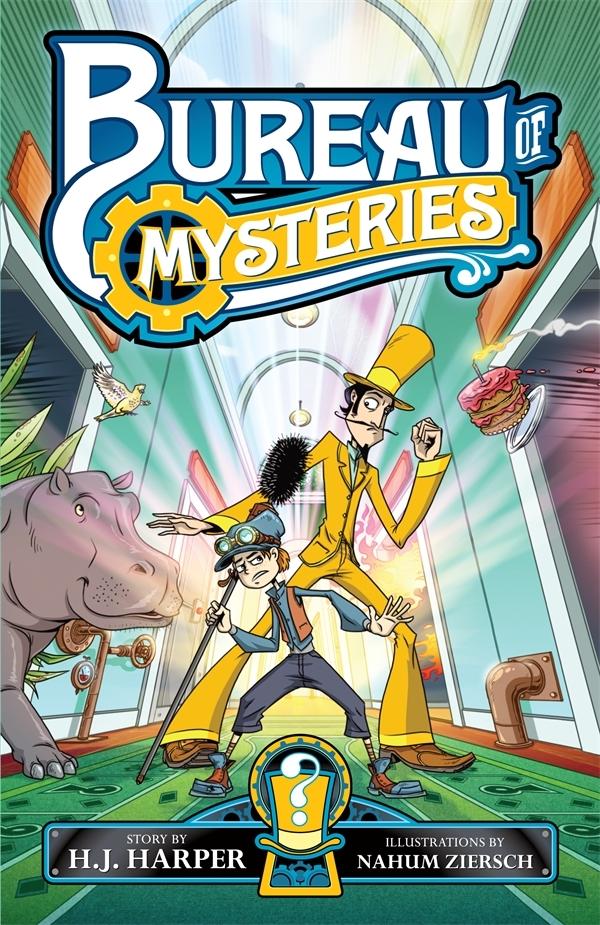 Strange things happen in Little Obscurity - but the Bureau of Mysteries is always there to investigate. In the bustling city of Little Obscurity, George Feather lives a fairly uneventful life. That is, until he falls down a chimney and discovers the Bureau of Mysteries, an eccentric group of investigators and codebreakers who live in between the floors of the Brass Castle Hotel. After learning that evil Clockwork Octopus Society are planning to wreak havoc on Little Obscurity, George is quickly recruited to help track the villains down. Along with his partner, Imp, George follows the trails of evidence and cracks the codes that each of their suspects leave behind. Chased by swarms of mechanical insects, overcome by horrible smells and trapped in train tunnels, George and Imp have a gigantic task ahead of them. Will they be able to solve all of the cryptic clues in time to save the city? Bureau of Mysteries is jampacked with exciting action scenes, hilarious characters and fun puzzles and codes to solve.

Let me introduce you to George Feather, chimney sweep and assistant cryptographer. While sweeping chimneys in the city of Little Obscurity, George literally falls upon a mystery, or more rightly falls into the Bureau of Mysteries. Quickly recruited into the Bureau, George sets out to save the city from a gang of criminals bent on mayhem. And he is taking us with him. Armed with the Cryptographer’s Compendium (code-breaking book), George and the reader decode increasingly tricky clues in the quest to foil the plans of The Clockwork Octopus Society. As George learns a code and how to break it, so do we. Try it: they’re tricky, but fun to crack.

The world of Little Obscurity in 1886 much resembles Dickensian England except that in the best tradition of Steampunk many things have developed very differently. There are clockroaches and markets with mechanical chickens and flying vehicles. But there are also the orphanages that supply child labour (such as George, a seasoned chimney sweep at the age of 12). This highly stylised steampunk world is wonderfully illustrated in Nahum Ziersch’s panels depicting characters and scenes in the unfolding adventure.

In Bureau of Mysteries, H.J. Harper creates a fantastic world rich in humour and wordplay (evil Doctor Morrie Artery springs to mind) that pays homage to nineteenth-century fantasists such as Conan Doyle and Verne, while delivering an action-packed adventure in which the reader and George race to save the day. Enjoy the rollicking adventure and look out for the Barbarian Librarians along the way.

Star League 2: Curse Of The Werewolf

Star League 2: Curse Of The Werewolf