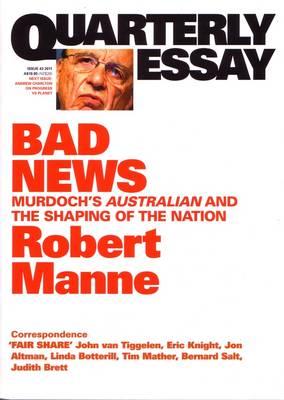 But what about in Australia, where he owns 70 per cent of the press? In Bad News, Robert Manne investigates Murdoch’s lead political voice here, the Australian newspaper, and how it shapes debate. Since 2002, under the editorship of Chris Mitchell, the Australian has come to see itself as judge, jury and would-be executioner of leaders and policies. Is this a dangerous case of power without responsibility? In a series of devastating case studies, Manne examines the paper’s campaigns against the Rudd government and more recently the Greens, its climate coverage and its ruthless pursuit of its enemies and critics. Manne also considers the standards of the paper and its influence more generally. This brilliant essay is part deep analysis and part vivid portrait of what happens when a newspaper goes rouge. ‘The Australian sees itself not as a mere newspaper, but as a player in the game of national politics, calling upon the vast resources of the Murdoch empire and the millions of words it has available to it to try to make and unmake governments.’ Robert Manne, Bad News

END_OF_DOCUMENT_TOKEN_TO_BE_REPLACED

In the third Quarterly Essay for 2011, Robert Manne investigates the forces that shape public debate in Australia. When it comes to key issues for the nation, who sets the media agenda and how do they do it?

Gathers the fruits of political and cultural debate: from the Cold War to the Iraq War, from the stolen generations to the asylum seekers, from Australian party politics to the culture wars. There is also an array of essays on...

Sending Them Home: Refugees and the New Politics of Indifference: Quarterly Essay 13

This is a groundbreaking and dramatic account of a transformation with global consequences. As other Western nations come to adopt similarly harsh measures, this account will serve as a prophetic evocation and analysis of the...