A Game of Our Own: The Origins of Australian Football 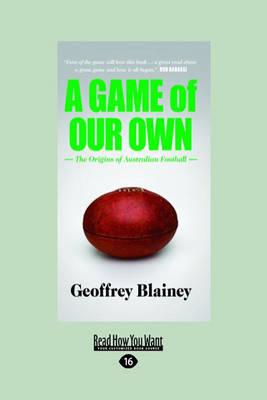 A Game of Our Own: The Origins of Australian Football

Today Australian Rules football is a multi-million-dollar business, with superstar players, high-profile presidents and enough scandals to fill a soap opera. The game has changed beyond recognition - or has it? In A Game of Our Own, historian Geoffrey Blainey documents the birth of our great national game. Who were the characters and champions of the early days of Australian football? How was the VFL formed? Why was the umpire’s job so difficult? Blainey takes a sceptical look at the idea that the game had its origins in Ireland or in Aboriginal pastimes. Instead, he demonstrates that footy was a series of inventions. The game played in 1880 was very different to that of 1860, just as the game played today is different again. Journey back to an era when the ground was not oval, when captains acted as umpires, when players wore caps and jerseys bearing forgotten colours and kicked a round ball that soon lost its shape. A Game of Our Own is a fascinating social history and a compulsory read for all true fans of the game.