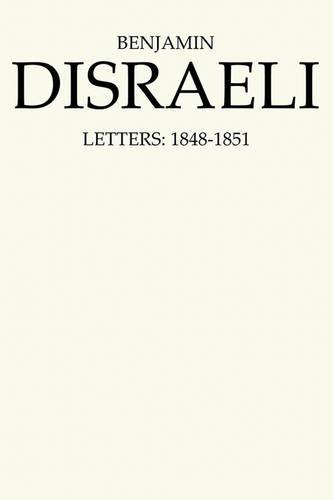 Against a European background of the 1848 revolutions and Louis Napoleon’s 1851 coup, the 602 letters of this volume cover Disraeli’s accession to the leadership of his party in the House of Commons and his first attempts to move the party beyond reactionary protectionism and ultra-Protestantism. In this period, Disraeli works hard at all aspects of his new role, finding ‘good men’ to bring into the party, patching rifts within it, and establishing a new platform on which to maintain the system of landed aristocracy in the age of free trade. When the chance to form a government comes, however, his party is unsuccessful. The turmoil in the world at large is matched by that in Disraeli’s own affairs. Foremost are the deaths of his father, a central figure in his intellectual development, and of Lord George Bentinck, the anchor of his financial and political strategies. Once again, his creditors threaten to drive him from public life, and come alarmingly close to success on at least one occasion. In addition, his marriage goes through a major crisis, as Mary Anne Disraeli’s jealousy over his frequent correspondence with Lady Londonderry and his regular visits to her precipitates an actual separation and period of estrangement. His major correspondent and confidante continues to be his sister Sarah, but there are also a surprising number of letters (many of them previously unpublished) to major figures such as Metternich and Derby. The volume ends with the exchanges between Disraeli and other political leaders on the verge of a second chance at government, which in 1852 will bring a brief taste of power at last.