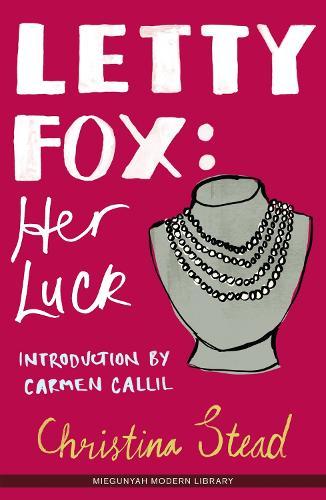 One hot night last spring, after waiting fruitlessly for a call from my then lover, with whom I had quarreled the same afternoon, and finding one of my black moods on me, I flung out of my lonely room on the ninth floor (unlucky number) in a hotel in lower Fifth Avenue and rushed into the streets of the Village, feeling bad.
Letty Fox: Her Luck, Christina Stead’s sixth novel, was first published in New York in 1946, and banned in Australia for its salaciousness. Set in wartime Manhattan and told in Letty’s own spiky and exuberant voice, the novel follows her successes and failures in the game of ‘being somebody’. Letty’s tireless pursuit of love and sex provides the setting for Stead’s brilliant satire of marriage, desire and the conventions that surround them.
Christina Stead was born in Sydney in 1902, and died there in 1983. Most of her life was spent elsewhere: in London, Paris and other places in Europe, and in the United States. Her first book, The Salzburg Tales, was published in 1934, followed by twelve more works of fiction. Letty Fox is Stead’s sixth novel. She was the recipient of the inaugural Patrick White Literary Prize.
$24.99Add to basket ›

END_OF_DOCUMENT_TOKEN_TO_BE_REPLACED

Sam and Henny Pollit are a warring husband and wife, he a fully blown narcissist and she spoiled and prone to fits of despair. Christina Stead's masterpiece about family life is acknowledged as a contemporary classic of Australian...

Sam and Henny Pollit are a warring husband and wife, he a fully blown narcissist and she spoiled and prone to fits of despair. Christina Stead's masterpiece about family life is acknowledged as a contemporary classic of Australian...

Letty Fox tells her story as a self-styled woman in New York's world of passion, love and sexual bargaining. As a bright, uninhibited daughter of a middle class couple who believes the world is her oyster, Letty Fox tells it all -...