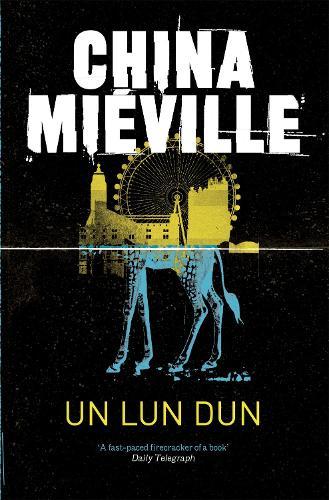 From the three-time winner of the prestigious Arthur C. Clarke Award The iron wheel began to spin, slowly at first, then faster and faster. The room grew darker. As the light lessened, so did the sound. Deeba and Zanna stared at each other in wonder. The noise of the cars and vans and motorbikes outside grew tinny… The wheel turned off all the cars and turned off all the lamps. It was turning off London. Zanna and Deeba are two girls leading ordinary lives, until they stumble into the world of UnLondon, an urban Wonderland where all the lost and broken things of London end up… and some of its lost and broken people too. Here discarded umbrellas stalk with spidery menace, carnivorous giraffes roam the streets, and a jungle sprawls beyond the door of an ordinary house. UnLondon is under siege by the sinister Smog and its stink-junkie slaves; it is a city awaiting its hero. Guided by a magic book that can’t quite get its facts straight, and pursued by Hemi the half-ghost boy, the girls set out to stop the poisonous cloud before it burns everything in its path. They are joined in their quest by a motley band of UnLondon locals, including Brokkenbroll, boss of the broken umbrellas, Obaday Fing, a couturier whose head is an enormous pincushion, and an empty milk carton called Curdle. The world of UnLondon is populated by astonishing frights and delights that will thrill the imagination. PRAISE FOR CHINA MIEVILLE [Mieville’s] wit dazzles, his humour is lively, and the pure vitality of his imagination is astonishing. Ursula K. Le Guin, The Guardian (on Three Moments of an Explosion) Dark and thought-provoking. The San Diego Union-Tribune (on The City & The City) Richly conceived. The New York Times Book Review (on Embassytown) Mieville more than delivers. San Francisco Chronicle (on Kraken) Compulsively readable. The Washington Post Book World (on Perdido Street Station)

END_OF_DOCUMENT_TOKEN_TO_BE_REPLACED

Looking for Jake and Other Stories