Your novel has drawn comparisons to Lolita and On the Road, among other works. Were either of these novels – particularly Lolita – direct influences on *The Ice Age?*

Not directly, though I have read On the Road and Lolita (when I was around Lolita’s age). It didn’t occur to me until I finished writing and starting pitching The Ice Age to publishers that I’d written a sort of reverse Lolita.

The narrator, an adolescent precariously treading the line between childhood and adulthood, offers a unique perspective on the adult world she observes, her distance alternately gifting her with knowing and handicapping her with naivety. Were you particularly drawn to this stage of life, and the perspective it offers?

Yes, I chose an adolescent viewpoint specifically for its clarity and limitations. I wanted the reader to be able to peer through her naive take and see more than she does at times, but also benefit from her blunt observations, that are free of the compromises and existential clutter that we accumulate as we grow older.

The character of Gunther, the narrator’s much older travelling companion, is a wonderful enigma: a charismatic, drug-taking reformed hedonist and loner, who is passionate about literature and art. Was it fun to create him? What inspired him as a character?

I loved writing the character of Gunther. He is so secretive and dignified that even as the person creating his character, I felt I should keep a respectful distance. He was initially inspired by my boyfriend, specifically the part of him that is an old soul, and by my unhealthy vampire fixation and sense of nostalgia. From there I let my imagination wander. This book was written in such a stream-of-consciousness manner that it is hard for me to pinpoint where much of it originated. There is even some of me in Gunther. His arthouse leanings, picky eating habits, and tendency to waste his talents, although exaggerated, are all mine.

The Ice Age offers a sinister view of insular, isolated middle America. The narrator says the country is ‘less scary-weird when you get close to the edges. People are just more normal.’ Do you share her viewpoint?

The luxury of writing from her perspective is that she can make unapologetic pronouncements with impunity, whereas I tend to see things from several different angles, and talk myself out of generalisations. I could never write off an entire region of people. Having said that, when it comes to the USA, I generally feel more comfortable on the coast(s). My personal biases, past and current, certainly inform some of her opinions.

The background of the teenage narrator seems deliberately vague – she’s from small-town America and hungry for adventure, she doesn’t make friends her own age easily, but that’s all we’re really told about her. There are plenty of gaps for the reader to fill in. What was the thinking behind that? And do you know more about her than you’re telling?

I aimed to create the kind of characters that would be encountered travelling. We don’t know everything about people we meet. We don’t even know everything about ourselves. Leaving a sense of mystery intact made the characters feel more real to me as I wrote them. I wanted the reader to feel the same sense of wonder they’d feel toward another person. Also, I didn’t want her to reveal more than I felt she realistically would. When I was her age, I didn’t share anything I didn’t want to, and her character is loosely based on a younger me.

Like all road novels, The Ice Age is about a metaphorical journey – a journey of transformation – as much as a physical one. It seems to be very much about loss of innocence and the passage from naivety to knowing; both celebrating and mourning that journey. How do you see the narrator’s journey? Is that what you had in mind, or was it something different?

I told this story with mixed feelings; celebrating and mourning that journey is a perfect way to put it. I was at time of questioning in my life, wondering whether I had lamely relinquished my dreams and aspirations, or whether I was naive to have entertained them in the first place. The book explores this quandary. The narrator is driven by intense longing; needing and wanting things from the world, and the people around her, and is hopelessly in love. I wanted to show this state for what it is: open to both good and bad experiences, full of passion and vulnerability.

You’re a visual artist as well as a writer, and there are some marvellous word pictures in the novel (like Gunther’s “iceberg eyes”). Do you think that your work in the visual medium influences your writing at all – the way you see the world?

I’m sure it does. I’m such a visual person. I saw the story unfolding before me like a movie as I wrote it. 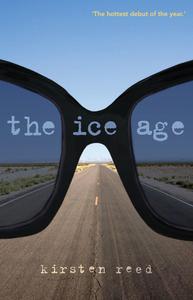