Melbourne GP Jacinta Halloran was shortlisted for the 2007 Victorian Premier’s Award for an Unpublished Manuscript for an earlier version of her first novel, Dissection, which is being launched this month by Helen Garner. That’s two pretty auspicious ways to kick off a writing career. Georgia Blain spoke to Jacinta for the latest in Readings series of Australian Features showcasing new and emerging writers, sponsored by the Copyright Agency Limited (CAL).

Each of us has a carefully constructed sense of self. We build it, gradually, from a young age, and try to fortress it against the inevitable small daily chips that chisel back the armour, and the larger blows that run the risk of cracking the core. In her very taut and lean first novel, Jacinta Halloran takes a female GP protagonist, Dr Anna McBride, and puts her under the microscope as she suffers one such blow. Following a case of delayed diagnosis necessitating the amputation of a young man’s leg, McBride finds herself facing a negligence suit. Despite being aware that her mistake is one any doctor easily could have made, the experience is a shattering one.

The novel is a beautifully executed dissection of a rapidly crumbling inner core. With precision and skill, Halloran lays McBride bare, examining her as she cracks and disintegrates, page by page. It is, at times, a painful read, a little like watching a car crash, as we see the effect of this one mistake running through McBride’s professional life, and then into her personal life. It is also a thought-provoking novel, because it is so much more than just a careful examination of individual self doubt and suffering. It questions – in a much broader sense – the infallibility that we expect from others and the consequences of those expectations.

Halloran, who is herself a GP, said the impetus for writing Dissection came from an article she read about a doctor facing a negligence suit. What intrigued Halloran was the woman’s discussion of the failure of her marriage, which she attributed to the stress of the impending court case. “The details of the negligence case in my novel – who did what to whom – are backgrounded, intentionally,” she said. “I wanted to focus on the emotions of my protagonist – her self-doubt, her terrible guilt about doing harm, and the loss of equilibrium and confidence that begins to infiltrate her faith in her marriage.”

Halloran believes most doctors (and particularly female doctors) worry about being sued. It’s an inevitable aspect of an occupation that has become increasingly demanding and challenging. “Doctors are required to keep up to date with an ever-expanding range of medical information; they have real time constraints (especially given the current shortage of GPs nationally); they work essentially in isolation; and as primary caregivers they are constantly required to be vigilant for the rarer, serious condition among the plethora of common, more minor complaints,” she said. “It’s perhaps unwise to generalise about the issues faced by female GPs, but I would say that there’s some evidence that women tend to spend longer with patients, especially those with mental health issues. Many female GPs have children and work part-time: in such a situation one can find oneself ‘giving’ and ‘caring’ full-time, and this can be very draining. ‘Compassion overload,’ it’s sometimes called.”

“If a doctor does become the subject of a negligence case, it’s not just the difficulty of going through the legal formalities – of speaking in a different language, that of the law,” Halloran said. “It’s the whole self-analysis that such a suit engenders. Doctors, by nature, are usually high-achieving and self-exacting people, and the concept of harming a patient is very confronting to their sense of self.” This is certainly the case with Anna McBride, who has, until her mistake, never really questioned either her profession or her role in it. Now, she doubts every action she takes and every decision she makes, and this doubt eats away at any faith she has in her work having worth or value. In the process, which is inevitably one of self-absorption, she cuts off from her husband and her children, causing further destruction to her sense of self.

Halloran depicts McBride perfectly – a middle-aged woman who suddenly looks in the mirror and sees all her fallibilities painfully on display. There is also considerable compassion in this depiction. She is a woman we feel we know. One of the other very powerful aspects of the book is its understanding of how life and human interaction do not sit neatly within the expectations of the medical and legal professions. There are rarely definitive answers or clear rights and wrongs, but we frequently expect this from our doctors – and the law certainly demands it when it is called upon to judge their conduct. As Halloran says: “Anna McBride is not a bad person but neither is she perfect – as a doctor, wife and mother, she has made mistakes. Hasn’t everyone? I have tried to make Anna a real woman, riddled with self-doubt and negativity yet capable of love and kindness, and I have tried to make her relationships with her husband and children also real. Relationships are full of ambivalence – in general life is full of ambivalence, too, and shades of grey – and I have tried to capture this in this novel.”

Halloran came to writing – like many new authors – through a tertiary course. “After doing editing and non-fiction writing subjects I felt confident enough to start a novel. [Melbourne writer] Antoni Jach was my teacher at this time and he encouraged me to enrol in a Masters of Creative Writing at RMIT, which I did. I am due to finish this MA very soon. Both the RMIT diploma course and the MA provided wonderful and very supportive writing environments.” Halloran also reads widely, naming the Canadian short story writer, Alice Munro, experimental French writer Marie Darrieussecq and the Nobel Prize winner, J. M. Coetzee, as just some of her favourite authors. “Coetzee’s prose is always magnificent – the rhythm beautiful, the words so precise, the consciousness and self-consciousness of his characters so superbly drawn. He writes in a different way from many novelists – he is always questioning the function of language.”

With her first novel now published, Halloran is planning her second. “It’s about a mother and her two daughters who set out on a journey – a pilgrimage if you like. (I was brought up a Catholic and I find religious ideas making their way into my work!) There may be some medical themes – life-threatening illness and death will feature – but I envisage the novel to be largely concerned with the relationship between the three women.”

She is also still working as a GP. “I work in a large practice as an employee, so I don’t have the added work of running my own practice,” she said. “I try to write two days a week and can of course extend this if I want to. It’s a good balance. Writing is a very solitary occupation – not only physically but mentally – your mind turns in on itself – at least, that’s been my experience to date. It can be difficult. So it’s good to get to work and think about my patients and their lives, their stories, for a change.” 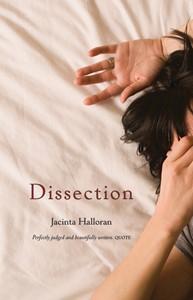