First-time author Foz Meadows talks to us about her new Young Adult book Solace and Grief, why vampires are just so hot right now and why she will never forget her 16-year-old self.

So, tell us what your book is about.

Solace & Grief is about Solace Morgan, a teenage girl raised in foster care doing her level best to conceal the fact that she’s a vampire. After encountering a faceless man, Solace runs away and finds herself in the company of her first ever friends, none of whom are exactly plain old human. They live in an abandoned warehouse; they drink and joke, but once Solace decides to try and learn more about their respective abilities, they soon find themselves in over their heads with the mysterious Professor Lukin and a string of increasingly dangerous occurrences.

What was you inspiration for the novel? Actually, why the vampires?

Blame Buffy the Vampire Slayer, basically. I was working in a job that bored me, re-watching Buffy (as I do from time to time) and the opening prologue just occurred to me. The thought that may have triggered it off was that all the vamps in Buffy are innately evil (excepting Angel and Spike on occasion) but humanity has a choice to become evil or not. I also really like the idea of a female vampire because it’s usually fragile girl encounters brooding vampire male. I think its more interesting if she’s the one with fangs. I’m not the only one to have done that but it’s interesting that all the other writers to be popular at the moment, Claudia Gray, Cassandra Clare and of course, Stephanie Meyer are all writers I didn’t become familiar with until after I finished writing. I think there was something in the air at that time.

Do you think its terrible timing or fantastic timing that you happened to write your vampire book now, hot on the heels of so many others?

Honestly, I think its more good luck than bad. Had I not been shopping it around when I did I think it would have been much harder to find an interested publisher. I’m a young, un-agented first-time author and while I flatter myself that I can string a sentence together, I think it did help that this book was part of a trend.

Was it a deliberate decision to focus the book on friendship rather than on a specific romance?

I think it grew out of the fact that I was never going to sit down and write a romance, that’s just something that has never occurred to me to do. When I was at school I had a big group of friends and we were all geeks, roughly the same number of boys and girls. I think that’s something that a lot of other novels I’ve read miss out on, that group dynamic. It narrows down the relationships but my memory of that age is of a large rotating group that had seven or so core members. And there were always group politics and who was talking to whom. The big thing about being that age was finding a group of friends with whom I really connected and I wanted that to be the story.

How does the voice differ in writing for young adults and for adults?

I don’t think my style changes, the only exception is in writing for adults I feel no compunction whatever about swearing and I feel no compunction talking about drugs or alcohol. A strange taboo I think, when I remember my own experience in high school and we loved to swear. But authors like Justine Larbalestier in her novel Liar, I was cheering as I read it, she uses swearing and I think, yes, that how they would speak.

Do you write for yourself as a teenager?

A little bit, yeah. On the one hand I never want to forget what its like to be a teenager but if the point ever comes that I sit down and think, wow, being sixteen was so awesome, then I will be truly lost. There were awesome moments but there was a whole pile of stuff as well and the stuff is what’s important. Parents just see the youth, the lack of responsibility and the potential but they forget kids are doing everything for the first time. And that first time can really, really suck. Especially when all of the people who are meant to be advising us have usually banished and repressed the memories of how hard it was the first time. So if I were writing for my teenage self I would be writing to show I hadn’t entirely forgotten.

What do you think of the idea that there is too much darkness in kids books, especially YA books?

I think that’s rubbish. If we want to go back to the 1950s view of adolescence, I think they might like to look at the statistics that are now emerging on abuse in families, depression among women, child abuse. At the time, that era, it was something that was not to be discussed, if the victim came forward they were brutally repressed, children had no outlet. And over the top of this era we have an image of the 1950s as Happy Days but it’s just a candy coating. Going back to what I said before, you’re doing everything for the first time and if there are questions you can’t ask and can’t answer then you need to find someone who is going through the same thing you are. Even in a fantasy world, what makes fantasy real is the extent to which characters are human and if we can identify with the characters and the emotional transformation they go through remind you of something you are trying to get through in your life. More than anything else it tells you, you are not the first person going through this.

What would you like readers to take away from this novel?

Oh, that’s a tricky question. I think I would like them to take away that high school is not the be all and end all of human existence. Things do go on outside of it and once you’re not there anymore, the things that were important while you were there cease to be. And that’s actually a really, really good thing.

Ooo, long list. Tamora Pierce, Neil Gaiman, Terry Pratchett, Katherine Kerr, Kate Elliot, Robin Hobb, Nick Harthaway and Douglas Adams, although I have to say I am more of a fan of the Hitchhiker’s Guide to the Galaxy radio show than the books.

I have no idea how I got him to launch my book. It was a shot in the dark, I am a huge fan of his work and he gave me some advice when I trying to get published, so I thought what the hell and emailed him. 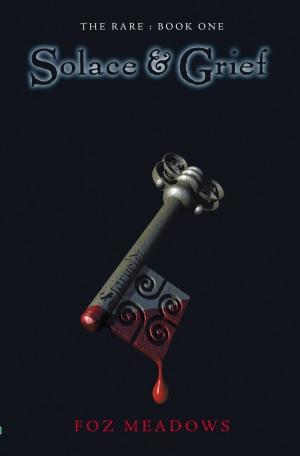