Melbourne University philosopher Damon Young got people talking with a recent Age article on children and creativity. His first book, Distraction, is popular philosophy at its best – vibrantly relevant to everyday lives, without being at all dumbed-down. Maria Tumarkin spoke to Damon for Readings’ series on new and emerging Australian authors, sponsored by CAL.

There they were in a noisy café – the philosopher and the publisher – throwing around possible ideas for a book. Only, the philosopher was ridiculously immobile from the neck up, thanks to a recent judo-related incident. ‘As a philosopher, you do yourself an injustice by having narrow interests,’ reflects the now fully-recovered Damon Young. And so it was during that fateful café conversation that he hit on the idea of distraction as the central, binding theme for his first book, Distraction: A Philosopher’s Guide to Being Free.

It was pretty straightforward really. He thought about all these people he knew, himself included, and about how they all struggled to identify and seize on what mattered to them above all in their life. This was, he realised, one thing everyone around him had shared – the never-ending struggle with distractions. And we are not talking (thank god!) about the sinister side-effects of living in a world that is too fast, too noisy, too relentless, too irrevocably awash in information and sensory overload. For Young, distraction is ultimately a question of value. ‘To be diverted,’ he writes, ‘isn’t simply to have too many stimuli but to be confused about what to attend to and why. Distraction is the very opposite of emancipation: failing to see what is worthwhile in life, and lacking the wherewithal to seek it.’ And we pay for a life of distraction with nothing other than our freedom.

The antidote to the way we squander our attention and fail to commit ourselves to what matters most is not a life of cheerless single-mindedness or of dogmatic disengagement from the modern world. Rather, it is something that the Roman philosopher Seneca both advocated and came to embody: ‘a politics of character, with freedom as its goal.’

‘We have the weight of liberty,’ writes Young, ‘the opportunity and obligation to craft a life.’ In other words, it is imperative that we actively, tirelessly, relentlessly, time and time again, choose a fully conscious life.

Distraction, it must be said, is the kind of book you can read curled up in your bed or leaning against a pole at a bus stop, stuck at an airport departure lounge or on a silent retreat after all the mobile phones have been confiscated. It is the kind of book you can guzzle, dip in and out of, or leisurely savour. It is, in other words, the best kind of popular philosophy – popular not because it leeches off icons and idioms of popular culture in a desperate bid to seem ‘with it’, but popular in the real sense of the word, owing to its overriding, passionate concern with the business of living well, right now and not a second later, in this world in front of our eyes. ‘Because I am writing for everyone,’ says Young, ‘I am writing about things that are tangible, meaningful and intimate and because of that I cannot get stuck in abstractions. I have to keep coming back to things that are real to me. That’s what sometimes can make popular philosophy more philosophical than academic work. It is dealing with real anxieties, limitations and laments of this world.’

And so Distraction takes on the bread and butter of our lives: work, technology, politics, war, democracy, art and, of course, love and friendship. And across 250 pages, you are unlikely to come across a single pretentious word, or so much as a whiff of intellectual conceit. There is, at the same time, nothing dumbed-down about Young’s ideas or the questions he wants his readers to ask themselves once they have put the book away. This is because Distraction strikes a remarkable balance. Its unquestionable intellectual ambition, rigour and reach are turned into a generous, highly readable and always surprising prose by its author’s humility, the joy of writing apparent on every page and the book’s easy humour and warmth, aided beautifully by the witty and endearing illustrations by Daniel Keating. ‘Part of being human is knowing when to laugh,’ says Young. In fact, the more serious the matter, the more humour its genuine exploration demands. Humour is essential to a politics of self, to taking yourself on as a project because ‘being able to laugh at yourself is a form of humility – it allows you to step back from yourself and see your own shortcomings, blindspots’.

Distraction draws on the lives and ideas of a surprising and illuminating collection of philosophers, writers and artists – from Plato to Matisse, from Seneca to Machiavelli, from Nietzsche to T.S. Eliot. ‘They are not heroes,’ says Young, ‘they are my peers. They are people who I talk to like to my friends. What I do with their advice is my business but I will certainly ask for it. In writing this book I have wanted to meet them. I have wanted to say to Seneca, “Dear Seneca, your death is an inspiration!”. I wanted to say to Ovid, “your poems have survived!” I wanted to say to all of them, “All this time later, we remember you!”’

Distraction is a homage to thinkers and artists whose lives and ideas have both moved Young and transformed his thinking and his life. There is, of course, Marx (‘a curious mix of idler and workaholic’); Heidegger (‘a very important philosopher and a dangerously weak man’); Dutch philosopher Benedict de Spinoza (who, unlike so many modern academics, thought that being part of academia would be an unforgivable distraction from his work) and the Russian anarchist Bakunin.

Young admits to having an immense fondness for Bakunin, and no desire to slag off anarchism. He makes the point that Bakunin’s important and original political philosophy was essentially ruined by his character. ‘Bakunin was distracted by the perpetual war and by his appetites. His kind of freedom turned into a free reign to his ego.’ Eventually, the prophet of liberty at all costs became not much more than a caricature of himself, enslaved by his own appetites and conceits.

The need to thoroughly examine the relationship between one’s ideas and character is central to Young’s philosophy. After all, he says, ‘how can you expect to have a better world if you do not embody it?’ Embodying one’s key values and ideas, not merely settling on what they are, is a way out of a life consumed by distractions. ‘We have to examine not simply what we put our minds to but what we put our lives to’, he writes in Distraction.

Take children. In an article recently published by The Age and entitled ‘Driven by Distraction’, Young, the proud father of a toddler, argues convincingly against the rather prevalent idea that children are a distraction to our creative lives. Children are the opposite of a distraction, he says, because they are not simply valuable in themselves (being one of those things that matter most to most people) but also because they are valuable for their immense contribution to our creative insights and skills, for the way they can discipline us and give us a real sense of why it is that, come rain, shine or the next batch of paralysing self-doubts, we absolutely must continue writing, sculpting, painting or philosophising.

For all its warmth and accessibility, Distraction is by no means a ‘soft’ read. It is scathing about a distracted mind, ‘a clumsy, fumbling guide’ that often leads us ‘to seek asylum in false consolation, delusion or ubiquitous noise’. It has a lot to say about the world of work, dominated not by ‘information economy’ but ‘attention economy’, in which what looks like cutting-edge employment ‘turns out to be busywork’. Its sharp discussion of forms of governance and of our shared civic sphere is fuelled by Young’s profound disappointment with what it means to be political. Above all, it is insistent that we commit ourselves to shunning borrowed or half-baked lives, that, no matter how powerful the fears and the temptations, we retreat neither from ourselves nor from the world that we inhabit. 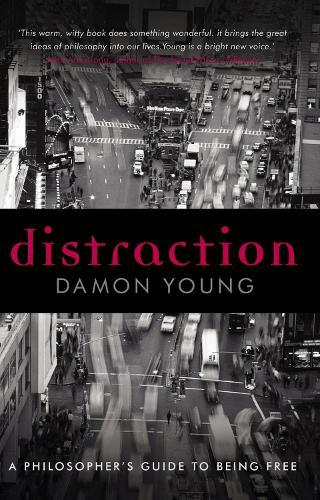 Distraction: A Philosopher’s Guide To Being Free