Young God will interest anyone who enjoyed Gillian Flynn’s dark female villains or Megan Abbott’s quietly disturbing narrators; the hill-and-valley folk who people Daniel Woodrell’s grim and stifling stories; or Bonnie Jo Campbell’s mid-western American heroes, heroines and deadbeats. That is to say, this debut from Katherine Faw Morris refers to a modern archetype – its anti-heroine, Nikki, old far beyond her years and living in a trailer, is a messed-up teenager with drug-dealing parents.

I am a fan of the genre – what has come to be known as ‘hillbilly noir’ – but I wonder whether this novel can stand on its own. Like its 13-year-old narrator who is finding her feet in a cheap pair of heels and a mean, mean world, it doesn’t have a whole lot of substance at first glance. The novel is short, and each scene sits as a brief vignette, often just a paragraph or two, alone on an otherwise blank page. Morris might be attempting to create a sense of the teenaged brain, barely conscious of what’s going on, remembering snippets, passing out in a drug-induced daze and coming to, suddenly, briefly. This effect is genuinely shocking.

What this novel does well is create the ugliness of Nikki’s world through an unflinching depiction of her embracing it wholly. Ultimately, she is not a very good person. Even so, I still find myself hoping that she’ll be okay, while knowing that she likely won’t – she is going to end up just like all of the other adults in her world, and there’s no romance in that.

The writing is spare, which gave me the impression of an incomplete novel – Morris has put this one on too much of a slow-boil. Having finished the book, I find myself craving Woodrell’s consistency, or Campbell’s poetic environments, even Cormac McCarthy’s often stifling, infinite horizons. But perhaps Young God is worth reading if only for that – as an impolite shove into its particular brand of contemporary US noir.

Amy Vuleta is the Assistant Manager at Readings St Kilda. 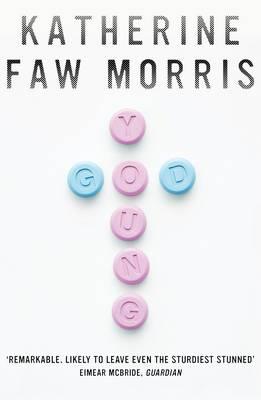