Why She Loves Him: Wendy James

Novelist Wendy James won critical acclaim for her debut, Out of the Silence, and last year’s The Steele Diaries. In this compulsively readable collection (much of it originally published in publications such as Meanjin and The Weekend Australian), she reveals a parallel talent for short fiction.

The stories here explore unhappy marriages, uncomfortable parent–child relationships, brittle friendships and imagined other lives – sometimes pursued, sometimes secretly pondered. ‘Love’s just an excuse for all kinds of shit,’ says the protagonist of the title story. ‘There’s always something you miss out, something you don’t know'. The characters include a work-from-home dad married to a career woman and fantasising about a religious playground mum and ‘the luxury of having a real wife’; an absent mother who chooses romance and freedom in the city over the hesitant, daring, affection and aching need of the son she’s left with her own cold mother; frenemies bound by their shared childhood; and a father whose casual lapse in judgement has chilling consequences. James is especially good with relationships and dialogue; she tells stories in the gaps between her characters’ words and thoughts. 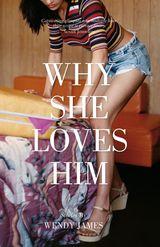