We Are Who We Are

Luca Guadagnino is a master at depicting big feelings. In his most celebrated films, I Am Love (2009), A Bigger Splash (2015), and Call Me by Your Name (2017), he travels deep inside the emotional landscapes of his characters as they experience love, shame, desire, joy and jealousy. Guadagnino’s visual style is intimate and sensual, drawing audiences close to the passions that make hearts beat. More than any filmmaker working today, he understands that humans are contradictory creatures, always in the process of becoming who they are.

We Are Who We Are is Guadagnino’s first venture into television and episodic storytelling. Unsurprisingly, he’s well suited to exploring adolescence, a time of colossal feelings and beautiful messes. Co-written by Guadagnino, Paolo Giordano and Francesca Manieri, this eight-part coming-of-age tale is set on a U.S. army base in Chioggia, near Venice. It’s summer when 14-year-old Fraser Wilson (Jack Dylan Grazer) arrives in Italy with his two mums – Colonel Sarah Wilson (Chloë Sevigny), the base’s new commander, and her wife Maggie (Alice Braga), a Major and a medic.

Fraser is shy, lonely and restless, but connects with Caitlin Poythress (Jordan Kristine Seamón) who lives next door. If an army base is a space that rewards conformity, these teens are fearless in their refusal to play by its rules. Caitlin is exploring her gender identity, shaving her head and dressing in typically masculine clothes; Fraser is her fiercest ally and making his own discoveries on the way.

We Are Who We Are has a strong sense of place, a brilliant soundtrack and bold performances from its young leads and wider supporting cast. It’s a series that speaks to our current cultural moment: each episode is entitled ‘Right here, right now’ (differentiated only by number) and represents a raw, unprocessed experience. Watching We Are Who We Are feels a lot like being a teenager. It’s a physical, emotional, strange, and sometimes unnerving rollercoaster ride. And it’s quite brilliant. 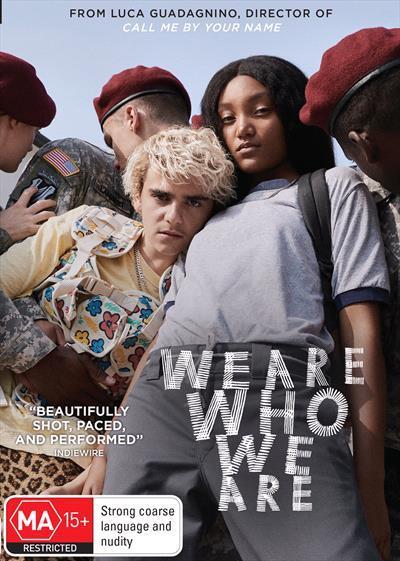