The Night of: Season 1

Nasir Khan is an economics student of Iranian heritage who has been caught up in a murder mystery, of which he is the prime suspect, at a thankless time for Muslims in New York City. Arrested for a crime he doesn’t remember committing, Nasir is sent to prison to await trial. Meanwhile, his parents search for him, encountering all manner of prejudice and bureaucratic hoop-jumping, from apathetic police officers to opportunistic lawyers.

Creator Richard Price (of Ransom, The Wire, and Clockers) writes a lot about the flawed legal systems, racial tensions and classism in the urban US and, with frequent Scorsese collaborator Steven Zallain, fills the eight-episode series with informed social commentary. Riz Ahmed is great as the traumatised Nasir, whose trauma is the great mystery of the show. Peyman Moaadi – star of recent Oscar favourite, A Separation – features as Nasir’s father, and along with John Turturro, the always impressive character actor of The Big Lebowski and Fading Gigolo, Moaadi brings prestige to what is otherwise a cast of relative unknowns.

For those who were a little disenchanted with the True Detective: Season Two, here you have a worthy substitute. The Night of combines the atmospheric tensions of True Detective with the documentary-like realism of The Wire and adds one of the best features of The Sopranos: several interesting character arcs that overlap episodes. It is also a pleasure for those who miss their weekly episodes of The Good Wife, and with them the observation of the art and scrutiny of a good case for the defence and the lottery of a trial by jury. Photographed in a proto-Fincher frame, with distance and emptiness its chief furnishing, this super-gritty crime drama is some of the best TV of 2016 and is unafraid of addressing the socio-economic issues pushing and pulling the scales of justice in the post-9/11 West. 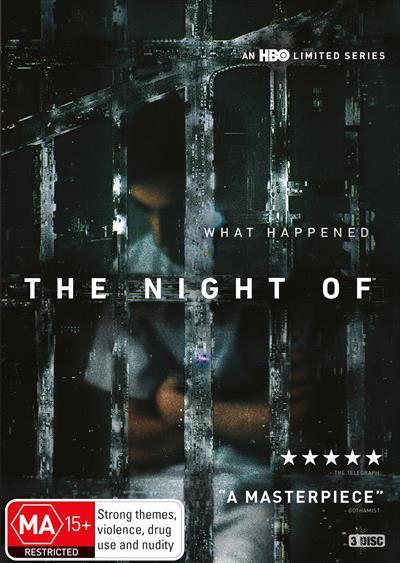 The Night Of (DVD)