This book is a disturbing one. Lindsay Tanner draws on a long career in public life to place in sharp perspective the view that politics and governance have been degraded by the collusion of politicians and the media that has trivialised the serious business of maintaining democracy in Australia.

Lindsay Tanner describes how political debate and discussion has degenerated into a form of entertainment and denounces what most us are aware of already – the political drivel to which we are constantly exposed. Tanner has explored the reasons why politics has been prostituted to meet the needs of the media. The never ending demand by the media for news has led to its trivialisation to the point where even hypothetical political issues or minor gaffs by politicians become momentous news items. Politicians have become caught in a trap of their own making – it is now important, according to Tanner, for them to be seen to be doing something even if that something is a waste of time such as announcing a policy without actually planning to follow it through – anything to get publicity that persuades the electorate that action is being taken.

Tanner does not blame politicians or the media solely for this state of affairs. He argues that it is the coalescence of a number of factors. These include an increasing complacency among the electorate, largely due to good economic times over the last 20 years; an unspoken symbiotic relationship between the media and politicians which has led to a charade and a “sideshow” focussing on trivia rather than on the important issues of policy development; a declining level in the quality of incisive and knowledgeable journalism and the social and economic changes that have caused the general public to become disengaged with politics.

The media’s constant attempts to trip up politicians or to cause them to make unplanned or unguarded statements have become the standard fare for political interviews. The subsequent distortion of facts has caused politicians to become completely risk averse and to retreat to the use of simplistic slogans rather than articulate sound arguments for policy development. We are all aware of the attempts by the media, particularly the so-called shock jocks, to ambush politicians. Consequently politicians evade answering questions directly to avoid being trapped. The aim of the media and, increasingly politicians is now to entertain rather than inform. The serious matter of describing new policies and explaining the serious issues facing the country has been reduced to the delivery of shallow one-liners and the discussion of complex issues has been eroded by over simplification, distortion and misrepresentation.

The banality of political debate reached its nadir during the 2010 federal election campaign which is widely regarded as the worst in Australian political history. This led to widespread disillusionment in the electorate and should act as a warning to our politicians. Tanner argues succinctly that this debasement of the body politic is bad for democracy.

This situation is not happening only in Australia. Though the book deals mainly with the Australian political scene, Tanner draws parallels with those in the UK and the USA where the situation is arguably worse.

If we accept that the media have a critical role in maintaining a healthy democracy by keeping the electorate informed on matters of public importance, including the crucial political and policy issues of the day and by promoting informed debate as well as probing and scrutinising policy issues then, Tanner contends, we are in deep trouble. This is the thrust of Tanner’s timely book. The book should be regarded as a flashing amber light, warning us all that unless there are changes to the way the media and politicians behave, our society will become increasingly disassociated with and disaffected by public affairs and political issues.

Just as Vance Packard in his classic 1950’s book The Hidden Persuaders warned us of the issues associated with manipulative advertising, so now Lindsay Tanner is issuing a similar warning on the degradation of our democratic system of government by the increasing tendency of the media and politicians to manipulate the discussion of substantive issues in ways that entertain rather than inform. Tanner believes the only way the situation can be changed is by growing public awareness of what is now happening and by promoting a shift in collective attitudes. His book is a timely and valuable catalyst in increasing our awareness of these emerging dangers to our democracy. We will only have ourselves to blame if we do not heed his warnings. We must all take some responsibility for changing the present state of affairs. By writing this book Lindsay Tanner has done us all a valuable service and I strongly recommend its reading.

Peter Gordon is a freelance reviewer. 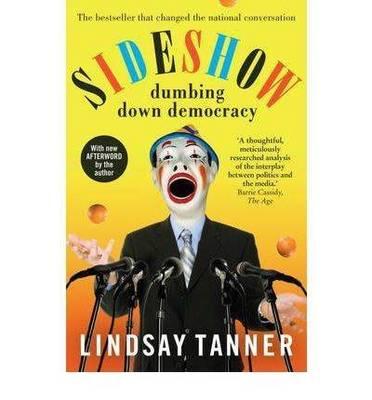