A number of years ago it was my great honour and privilege to be a judge of the Miles Franklin Award; in the 2003 awards Goldsmith’s novel The Prosperous Thief was shortlisted; coincidentally her partner, the late Dorothy Porter, was also shortlisted for her verse novel Wild Surmise. It was a wonderful tribute to the wildly different talents of these two marvellous Australian writers.

Goldsmith is at heart a storyteller; she writes rich, complex narratives with elaborately drawn characters that confront big dilemmas and convoluted relationships. Reunion tells the story of four people, friends from university days whose friendship has survived the twists and turns of adulthood and matured into a strangely compulsive bond.

The friends’ careers and personal lives have gone in different trajectories – there is the beautiful Ava, who has become an internationally acclaimed novelist; there is Jack, a mediocre academic whose earlier obscure interest in Islam has given his career a boost in our post-9/11 world (Jack also harbours an obsessive and unrequited love for Ava); Helen, a brilliant scientist on the cusp of a major breakthrough; and Connie, who was a slightly older tutor at university and is now a charismatic philosopher on the verge of a major TV career. Behind these four is Harry, Ava’s unlikely husband – the three friends (and especially Jack) can’t see what attracts Ava to him. Indeed, Ava had a very passionate and public affair with Fleur Macleish, a specialist in Indian Antiquities. To the surprise of the group, Harry has reinvented himself as the director of a cashed up quasi-academic foundation – NOGA (Network of Global Australians). One of Harry’s first grand gestures is to appoint the first NOGA fellows. The substantial fellowships go to Ava’s three friends and so the original group are reunited back in Melbourne for the first time in 20 years.

For Jack, there is the hope for a real relationship with Ava; for Helen, recognition and significant funding for her work; and for Connie the chance of the spotlight, money and women. And for Ava, a chance to gather her friends around her, to push her affair away and re-establish her relationship with Harry.

Reunion brings up questions of friendship and different kinds of relationships and it also questions the narcissism of contemporary society. For all their contempt of Harry’s NOGA and its corporate-funded largesse, the friends are initially happy to accept the money and comforts their fellowships bring. Initially, they grudgingly accept Harry’s suggestions for the direction of their work and his promises of more, couched in veiled threats. As the friends become embroiled in their own petty concerns, they fail to really notice or care about the changes in their friend Ava and in the end she has to turn elsewhere for succour and support.

Reunion is a rich and at times frustrating novel; it’s bold and brash in describing a group of characters who are ultimately frail and selfish. It’s hard to like most of them, but equally hard not to become obsessed with them – in the end, Reunion is a wonderful novel. 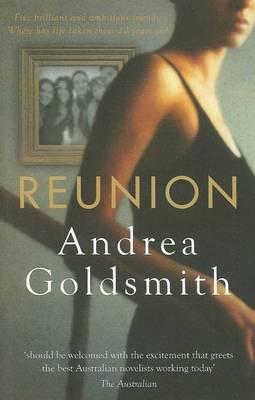