The first thing you notice about Lou Bloom is his face. As Nightcrawler’s anti-hero, Jake Gyllenhaal’s physical transformation is striking – gaunt and vascular, with wide, sunken eyes and an eerily toothy smile, a cross between American Psycho’s Patrick Bateman and the driver from Drive. This modern-day, neo-noir thriller is anchored by Bloom, a news-cameraman hell-bent on capturing exclusive footage of car crashes and crime scenes and selling them on to the highest bidder. Bloom may be an opportunistic sociopath, but his ruthless ambition is complimented by an astonishing work ethic and a perverse eye for capturing tragedy in a marketable way. Hungry to get ahead, he’s a mantra-spouting by-product of the American dream: ‘If you want to win the lottery, you have to make the money to buy a ticket.’

Gyllenhaal shines in this film. It’s a larger-than-life, chilling performance that drives every scene. Bloom’s sociopathic ascent up the ladder of commercial success is thrilling to behold, laced with deliciously acerbic humour. The supporting cast are similarly strong, but Rene Russo’s Nina Romina, a hardened news veteran, offers the most interesting counterpart to Gyllanhaal’s Bloom. As in Drive, Nightcrawler also successfully evokes quintessential Los Angeles – the cinematography is eerily beautiful.

Screenwriter Dan Gilroy’s directorial debut is a subversive, satirical thriller, brilliantly examining opportunistic greed in a crippled American economy. On one level the film works as a blackly funny character study, echoing Scorsese’s Taxi Driver or The King of Comedy. On another, Nightcrawler is a commentary on the state of tabloid journalism. At the film’s heart is a single question: ‘You’re going to show this?’ Gilroy’s critique of the 24-hour news cycle is far from subtle – in exploring its dark underbelly, he also makes a disturbing comment about the fetishistic appeal of violent accidents and crimes, where entertainment is dressed up as informative news ‘people can’t turn away from’.

Bursting with jet-black laughs and high-stakes thrills, Nightcrawler itself is impossible to turn away from. For Gyllenhaal alone, it’s a must-see and must-talk about film. 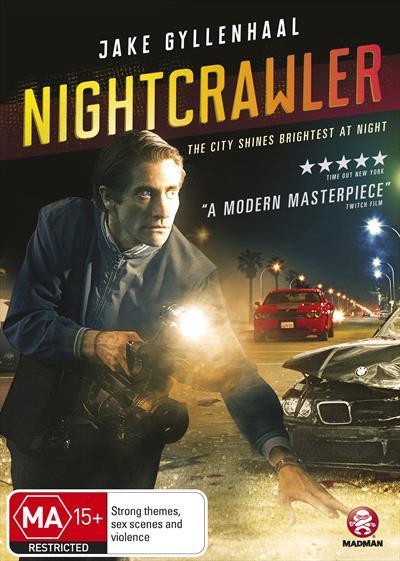