I love discovering new (but old and forgotten) composers and their long-neglected compositions. Everyone knows Rachmaninoff, his famous piano concertos (the second of which is on this album) and symphonic works. However, one of his closest friends, Nikolai Medtner, was also a composer. The pair often dedicated pieces to each other. Rachmaninoff’s music is stupendously famous and consistently performed, while Medtner has languished in obscurity. A number of high-profile musicians have tried to reignite interest in this composer over the years and after listening to this album on repeat for the last few days, I can only hope Medtner’s works will be recorded more frequently, as I’ve fallen in love.

Medtner was a proficient piano player, which meant he included piano as a major instrument and tonality in all his compositions. What’s interesting about his style is that several of his major works, including many sonatas and his piano concertos, are large single-movement works. There are seamless transitions between the musical ideas, and it takes a couple of listens before you truly get how the musical ideas all fit together. This album is dedicated to his mother (his original piano teacher). The soaring string section takes the virtuosic opening piano ideas and spreads them around. With clear influences from Rachmaninoff in tonality and melody, you still wouldn’t mistake Medtner for anyone but himself.

The other bonus to this recording is the fact that it is performed by an all-star Australian cast. Our very own Melbourne Symphony Orchestra, under assistant conductor Benjamin Northey, with the internationally renowned piano soloist Jayson Gillham, pull together to create a beautiful rendition of the beloved Rachmaninoff Piano Concerto No. 2 along with Medtner’s Piano Concerto No. 1 and a sweet Medtner Prelude breaking up the epic symphonic works.

(As a footnote for the book nerds, Philip Pullman said Medtner was his favourite composer in an interview in 2011.) 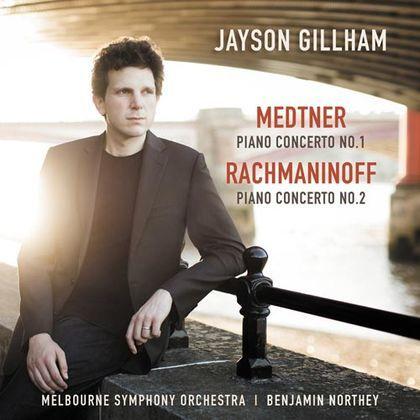