House of Cards Season 3 begins not at Episode 1 but at Chapter 27. It has become apparent that House of Cards is not a show structured season by season, but rather as a grand morality play, and we are about to watch the third act. At the end of Act II Frank Underwood finally gained the power we have been watching him manipulate his way towards since Episode 1. He is now the President of the United States of America, the power he has sought is seemingly within his grasp.

As Frank looks to govern with sweeping new policy and Claire moves to gain power in her own right, Season 3 resets the pieces for a new power play. It is hard at times not to see echoes of that other great American show concerned with the White House. In The West Wing though, philosophical arguments are concerned with explicating the legitimacy of the American way. In House of Cards the White House features not for itself but because it is the seat of power and the pursuit of power is the meat of House of Cards. But as is the case in Shakespearean tragedy, the gaining of power is simply the precursor to losing power. In keeping with this Shakespearean sensibility, Spacey as Frank Underwood declaims his thoughts to the fourth wall, his asides laying clear his intentions as the onscreen machinations become ever more labyrinthine.

This mortal quest for absolute power is perfectly encapsulated early in the season. After an exchange with a priest about the right to power Frank spits at a statue of Jesus in a show of anger and defiance then looks behind him in a moment of fear. We all know the fate of humans who would seek to emulate the gods. In a series so theatrical it can be easy to overlook the cinematic storytelling on display, yet the cinematography of House of Cards continues to provide the cool, even glacial, patina that contrasts so effectively with the Underwoods’ passion for power. 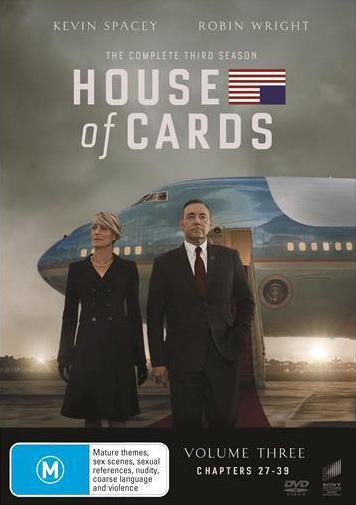