Hitch knows a lot of words like obloquy, exiguous or deliquescent; possibly from the word games he used to play with Martin Amis, Robert Conquest and Clive James … turn the word ‘house’ into ‘sock’ – Bleak Sock, Sock of the Rising Sun or Sock at Pooh Corner.

Hitch knows a lot of people: like Nelson Mandela, James Fenton, Ian McEwan and Salman Rushdie. Hitch dislikes a lot of things and people: like Bill Clinton, Henry Kissinger, God and Islam. Hitch’s parents were lower middle-class. His father had been forced out of the navy and his mother, Yvonne, was Jewish with aspirations. Yvonne did everything she could to turn Hitch into an upper-class Englishman and although they could only afford a second-rate public school, Hitch did manage to get into Oxford. At Oxford, he was immediately drawn into the politics of the left – it was the sixties – and in between manning the barricades and studying history and philosophy, he started going down to London and hanging around the New Statesman. With his biting, uncompromising prose, he became the darling journalist of the left and no cow was too sacred.

Eventually, tiring of London, he managed to get himself invited to Washington to write for The Nation. When his adopted home was attacked in 2001, his attitudes changed and his support for the invasion of Iraq outraged many of his admirers. Christopher Hitchens is a complex and highly intelligent writer; his opinions are often confronting and unsettling and he writes with the evangelism of the Trotskyist left that formed him.

Hitch-22 is an enthralling, and sometimes galling, portrait of one of the great commentators of the late twentieth and early twenty-first centuries – well worth a read. 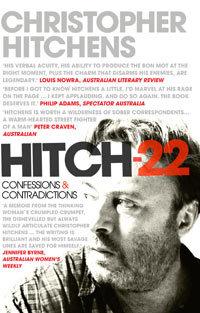