Every generation experiences a catastrophe: history can be read as a series of apocalypses. Do you think the people affected by the Dust Bowl felt like the Plebs during the Fall of Rome? Will we all feel these same experiences as conflagrations continue to decimate entire regions and the seas rise up to drown our cities? How far will we go to protect life? Will we do the right thing?

Michael Christie braids these ideas and questions through a North American multi-generational family saga. The story arcs from a rail disaster in 1908 that orphaned two children, through the peaks and troughs of the twentieth century, to a near future in which one of the world’s last forests begins to die. Just as every generation inherits the disasters made by their forebears, every child in this family grapples with the legacy of their parents. One lives a quiet life in the trees, disturbed by the rescue of an abandoned child. Another makes his living cutting down those trees. A daughter vows to protect the trees her father hasn’t yet destroyed. A son works timber to escape his upbringing. A daughter tries to preserve the last trees in a world that is rapidly leaving the poor to desperation and death.

Christie manages to keep this story moving along like the locomotive that created it: a page-turner that keeps a pace that can only end in a crash. But like the rings of the tree that structure this book, new things are built upon the dead world of the old. Despite this novel’s stoic acceptance of calamity, it remains hopeful that through a rejection of profit, and love of all life, we will maintain our future, however diminished it may be. 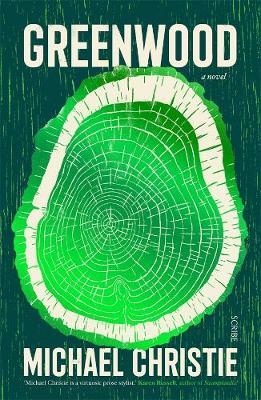