God’s Dog is a rare kind of literary detective novel: thrilling, hard-boiled and action-packed, with beautiful imagery and compelling insights into religion, science and philosophy. It’s also a uniquely Italian take on the dystopian genre, a relief after the flood from the Anglosphere. Reading translated novels is always a slightly unnerving experience, but as Italian author Diego Marani’s novel New Finnish Grammar was also translated by Judith Landry and won the Oxford-Weidenfeld Translation Prize in 2012, you can trust that you’re in good hands.

After surviving the 2010 Haiti earthquake as a child, Marani’s protagonist Domingo Salazar grew up in Italy within Catholic institutions. He’s now a policeman who upholds the ‘laws of our Holy Mother Church’: Italy is a theocracy and Salazar is ‘God’s dog’. His mission, given to him in a confessional by an elderly vicar, is to capture an abortionist doctor who is likely to commit the serious crime of euthanasia while visiting his terminally ill father. Salazar is also instructed to help foil whatever nefarious plans the Free Death Brigade have for the upcoming canonisation of Pope Benedict XVIII.

Although happy to follow these orders, Salazar is a complex man with complex ideas. While living in Holland, he’s been secretly building a movement called Bible-Koranism, ‘the new frontier of globalised faith’. This lands him and his ally Gunter in hot water with his Church superiors, threatening their lives even as Salazar continues to carry out what he sees as God’s work. To further complicate matters, Guntur is a neuro-psychiatrist who has taught a chimpanzee how to speak Swahili, posing a threat to Church doctrine.

Interviewed late last year by Samuel Rutter for Readings, Marani spoke of writing ‘the second adventure of an imaginary Vatican detective, Domingo Salazar … His first adventure was published in June and provoked quite a wave of criticism from the Catholic establishment. I’m looking for more!’ Anyone who reads God’s Dog will be eagerly anticipating more Salazar.

Kate Goldsworthy is a freelance reviewer. 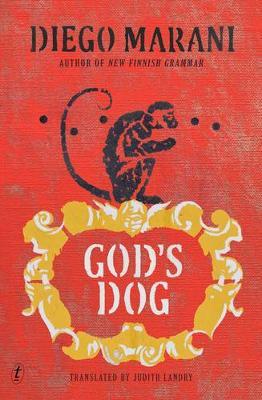