Karyn Kusama’s first film, Girlfight, had quite an impact on me back in 2000. Her most recent film, the crime thriller Destroyer, hit me just as hard. I have no doubt that when I sit down at the end of this year to consider the best, most significant films I’ve watched in 2019, Destroyer will be very close to the top of my list.

Destroyer opens with a close-up on Nicole Kidman’s face. Her usually porcelain skin is mottled and sallow; her eyes sunken; her hair a limp, mousy mop. It’s a very different look for the actress but what’s most striking about her performance, as Detective Erin Bell, is how she moves. Every step, as she drags herself around Los Angeles seeking revenge and redemption, tells us she’s worn out and worn down.

Kusama makes films about women’s rage and Destroyer is her angriest. Within Hollywood’s strict rulebook about how women should look and behave it is rare to see such fury expressed by anyone other than men on screen. But Erin is consumed by rage; she turns it inwards as punishment, and trains it outwards on a world that repeatedly evades justice and accountability. She’s haunted by her past as an undercover agent, buried deep in the California desert along with her partner Chris (Sebastian Stan). Her guilt about that case has made a mess of her life – she drinks too much – and of her relationships, especially with her teenage daughter Shelby.

There’s a chance for Erin to atone when members of the gang resurface; Erin hunts them down with what energy she has left. Kidman embodies this broken woman with a conviction that is, like Kusama’s direction, bold and utterly uncompromising. Despite its brutality, it’s a performance that bruises with vulnerability; once seen, not easily forgotten. 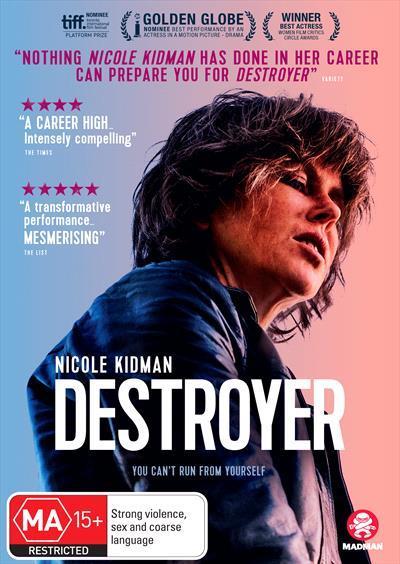