Sensitively adapted by Nick Hornby from Colm Tóibín’s beloved novel, Brooklyn is the story of Eilis (the mesmerising Saoirse Ronan), a young Irish immigrant who moves from small town Enniscorthy, Ireland, to the new horizons of Brooklyn, NYC. It is 1951, and like so many of her compatriots Eilis sees an opportunity to make a new life for herself. Crippled by homesickness but fiercely driven, Eilis quickly finds work and studies bookkeeping by night with the aid of a parish priest, Father Flood (Jim Broadbent). Soon Eilis encounters the intoxicating charm of Italian-American plumber Tony (a star-making performance by relative newcomer Emory Cohen). When a family tragedy brings Eilis back to Ireland, she finds herself absorbed into her old community and courted by Jim (Domhnall Gleeson). Repeatedly postponing her return to America, Eilis faces a terrible dilemma: a choice between two men and two countries.

Brooklyn is Hornby’s strongest work as a screenwriter, a warm, witty adaptation, rendering Tóibín’s novel as a moving coming-of-age story. For a contemporary adaptation of a novel published in 2009, Brooklyn has a distinctly classic tone. Emotionally intelligent and strikingly old-fashioned, the narrative takes place in the 1950s yet the film’s style evokes an older era of filmmaking, the 30s and 40s heyday of ‘women’s pictures’ starring Bette Davis or Joan Crawford. It’s a refreshing change, supported by intelligent costuming and set design, a combination that gives the film a timeless quality.

Ronan is spectacularly good and the true heart of Brooklyn. Understated yet captivating, the camera lingers adoringly on her face; her ability to detail intricate emotional divides with a fleeting acknowledgement is remarkable, and beautifully evokes the sense of being torn between both place and identity. Scenes with Ronan and Cohen together are electric, their tingling chemistry guaranteed to light up screens and send shivers down spines.

There are no forced moments in this old-fashioned gem of a film. Like Eilis herself, Brooklyn is modest, astutely observed and casts a subtle spell. 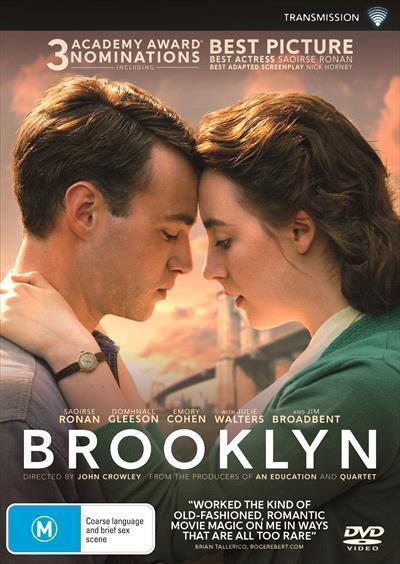