I go to the cinema quite regularly, but for some reason I overlooked Ali’s Wedding. I probably wouldn’t have picked it up on DVD either, except that I agreed to do our DVD buyer a favour and write this review!

Ali’s Wedding is based on the true experiences of co-writer and lead actor Osamah Sami, an Iraqi refugee. It’s been described as the best Australian comedy since The Castle and it certainly is a fun, feel-good movie about a young Muslim man who wants desperately to do the right thing by his family and make his father (Don Hany) proud.

Ali is about to sit his entrance exams to study medicine at Melbourne University. In spite of his best efforts, he doesn’t even come close to getting the score he needs. To save face with his family and the Muslim community, though, he lies about his score and turns up to classes anyway. Added to all of this is Ali’s infatuation with an Australian-born Lebanese girl, Dianne (Helena Sawires). Although Dianne’s father is against his daughter attending university, Ali manages to convince him it’s a good idea. A secret romance blossoms, as the two attend classes together, even though Ali’s family have already arranged a marriage for him. Inevitably, Ali’s lies are eventually uncovered.

Part of the appeal of the movie for me was the fact it was filmed in suburban Melbourne (some of it on the grounds of Melbourne University), so there are many familiar scenes throughout. AFL features quite a bit too and there’s a classic scene where American border security misinterprets a text Ali sent to his mate about an upcoming footy match – ‘the bombers will slaughter you’ takes on a whole different meaning. Ali’s Wedding is an enjoyable, charming, romantic comedy that I’m glad I got to see! 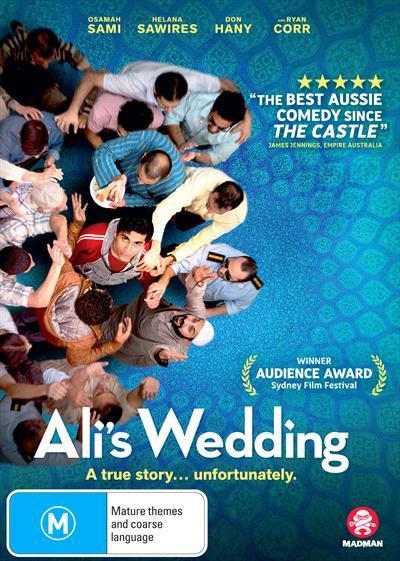