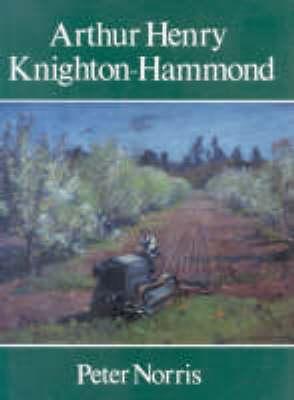 The finest painter in water-colour of our time , Augustus John once commented, though Knighton-Hammond was as prolific in oils and pastels. In this study of Knighton-Hammond’s life and work the author brings his achievements to our attention, establishing his name firmly as one of the major British painters of this century. Arthur Henry Knighton-Hammond, the son of William Hammond and Mary Knighton, was born in 1875 at Arnold, Nottingham. Leaving school aged 11, he later went on to study art at Nottingham School of Art During the First World War, Knighton-Hammond’s work at the Munitions Drawing Office in Manchester attracted the attention of Lord Moulton, who offered him a position at the British Dyestuffs Corporation, illustrating new types of buildings such as coke ovens, granaries and munitions buildings. His work there was seen by Herbert H. Dow, founder of the Dow Chemical Company in America, who commissioned a series of illustrations of the chemical plant. In 1920, the artist set sail for the USA and, during a six month stay, produced oil paintings, water colours and drawings of the interior and exterior of the plant. The recognition he gained was to lead to his election to the American Water Colour Society as one of only two Britons to hold membership at this time. A period on the Continent followed, where he painted predominantly in water-colour with a freedom of style, light and colour that had an air of impressionism about it. He returned often to England for exhibitions which were sometimes attended by royalty owing to his friendship with Prince Nicholas of Greece. Knighton-Hammond returned to England in 1932, and moved to Sussex, where he enjoyed painting portraits of local characters, and became friendly with fellow artists Sir Frank Brangwyn and Edward Johnston. Portraits of each by Knighton-Hammond are in the National Portrait Gallery. Knighton-Hammond continued to exhibit and to paint until his death in 1970, at the age of 94. Colour and black and white illustrations throughout the book illuminate Knighton-Hammond’s style and outstanding use of light, colour and movement.