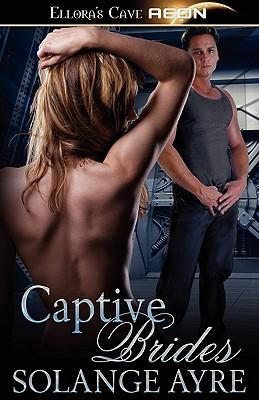 One Thousand Brides We require wives. A review of the populated planets in your region revealed that Earth females are the closest genetically to our species. Thus we have decided to take one thousand human females with us. As these words are broadcast over Earth media, Janis Stone blacks out. She awakens on an alien colonization ship, one of a thousand human women destined to become Brides of the Terilian colonists. At first outraged by the kidnapping, Jan soon finds herself intrigued by Delos, the Terilian doctor who serves as liaison to the human Brides. Despite his pointed, furry ears and the pelt down his back, Delos' muscular physique and wonderful scent draw Jan like catnip attracting a feline. The two embark on a sensual journey, exploring their species' sexual compatibility. But their new love is threatened when a higher-ranked male desires Jan. As she plans a mass wedding for the thousand Brides, she dreads the upcoming Spring Running, the mysterious rite where Terilians will mate with their Brides. Will the wrong groom claim her? Bride Reborn Snow Jarrett, suffering from Multiple Sclerosis, blacks out and awakens on an alien colonization ship. The Terilians, who lost all their females to a deadly virus, have kidnapped a thousand human women to be their Brides. Although her MS has been cured, Snow needs therapy to make her muscles strong again. Her physical therapist, Ryus of the Silver Pelt, is the most gorgeous male she’s ever met. Ryus provides a sensual mixture of sexual and physical therapy that soon has her eager to become his Bride. The ship’s council declares that if Snow is not strong enough to bring a male to climax, she will be exiled. Ryus, afraid to lose another loved one, tries to resist his overwhelming desire for the courageous Earth woman who has captured his heart.