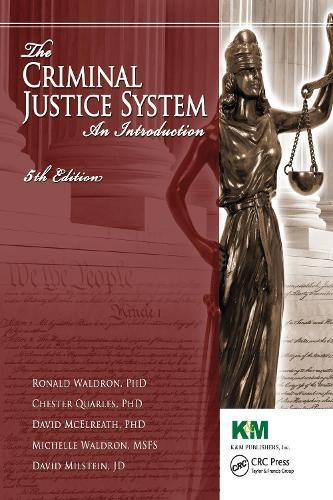 The Criminal Justice System: An Introduction, Fifth Edition incorporates the latest developments in the field while retaining the basic organization of previous editions which made this textbook so popular. Exploring the police, prosecutors, courts, and corrections, including probation and parole, the book moves chronologically through the different agencies in the order in which they are usually encountered when an individual goes through the criminal justice process. New in the Fifth Edition: A complete updating of charts and statistics to reflect the changes the FBI has made to the Unified Crime Reports System Expanded material on the history of law enforcement Additional information on terrorism, homeland security, and its effect on the police New approaches to policing such as Problem-Oriented Policing and Intelligence-Led Policing Cyber crime, identity theft, accreditation, and new approaches to crime analysis New information on prosecution standards, community prosecution, and prosecutorial abuse New emphasis on the concept of jurisdiction and the inter-relation between the courts' functions and the other branches of the criminal justice system An examination of the dilemma for the courts caused by the intersection of politics, funding, media, and technology New discussions on prisoner radicalization Pedagogical features: Each chapter begins with an outline and a statement of purpose to help students understand exactly what they are supposed to master and why Illustrations to assist in the clarification and further development of topics in the text Each chapter ends with a summary, a list of key terms, and a series of discussion questions to stimulate thought Appendices with the United States Constitution, a glossary of criminal justice terminology, and websites useful in gaining knowledge of the criminal justice system Access to a free computerized learning course based on the book