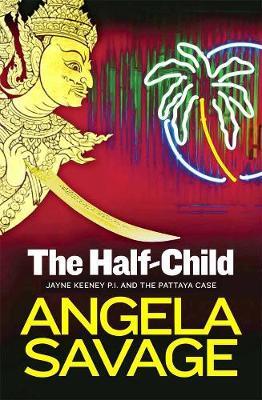 A new case for expat private investigator Jayne Keeney Jayne Keeney is a fiesty thirty-something Aussie who has been living in Bangkok for many years. She has been hired to investigate the alleged suicide of a young Australian woman in a seedy Thai coastal town. Maryanne Delbeck was happy and harmless, her father refuses to believe she took her own life. Jayne immerses herself in the case, navigating the backstreet world of Thai ladyboys, monks, strippers, expats and corrupt officials. Maryanne’s death is not the only mystery awaiting Jayne among Pattaya’s neon signs and go-go bars. While working undercover at the orphanage where Maryanne volunteered, Jayne discovers something far more sinister. Now her life is in danger, her case is still unsolved and she barely has time for dinner with her handsome new love interest, Rajiv. With love and death both circling, Jayne now has two cases to crack and very little time to do it. The Half-Child is not your standard crime novel, and Jayne Keeney is not your everyday detective.

When two bodies are discovered in the footings of a Bankstown building, Ned 'Ned' Kelly catches the case. As she works to uncover the truth, she is drawn into Sydney's dirty past and the murky history of her own family. Bit by...

When a brothel madam is shot on a golf course it should be a routine murder enquiry. But there's barely an investigation at all, and Superintendent Swann thinks he knows why. He might have won the first round by forcing a royal...