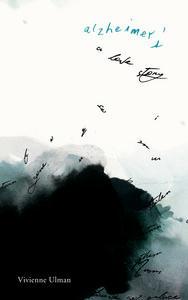 When Vivienne Ulman’s youngest child left home, she and her husband were poised to enjoy their freedom. Then her mother’s Alzheimer’s intervened. In Alzheimer’s- a love story, Vivienne records with tender lyricism and searing honesty the progress of her mother’s Alzheimer’s, her own grief over the gradual loss of her beloved mother, and the way in which her parents' enduring love for each other sustains them. Into this she weaves an account of her family’s history, in particular her father’s rise from farm boy to confidant of prime ministers - achievements made possible by the loving strength of the woman by his side. In a reversal of roles, he now amply returns this support. This inspiring Australian story is a tale for the sandwich generation, squeezed on one side by concerns for their children and on the other by anxiety about their parents. It is about illness, grief, and hardship, but it is also about love, determination, and joy.

In this beautifully written, bittersweet memoir, Vivienne Ulman tells the story of the gradual loss of her mother to Alzheimer’s. It’s the kind of story that will no doubt be told increasingly frequently; a tale of the so-called sandwich generation – people who have just completed the most arduous years of caring for their children when it becomes their duty to care for their parents, too.

The last of Ulman’s four children had left home when her mother’s symptoms first became evident. While her mother’s condition was still mild, Ulman and her husband moved from Melbourne to a small farm in Tasmania. ‘We were tree-changing, empty-nester baby boomers,’ she reflects wryly. Here, she details – with stark honesty – her struggle to be there for her mother, her father, her daughters, her husband, and to retain some remnant of self. She sharply evokes the maelstrom of feeling sparked by her mother’s condition: fierce love, equally fierce grief and anger, and fathomless nostalgia for her lost mother. Amid the grief and the loss, this is, more than anything, a celebration of her mother’s life, her long marriage – and the enduring devotion of her husband. A gorgeous book.