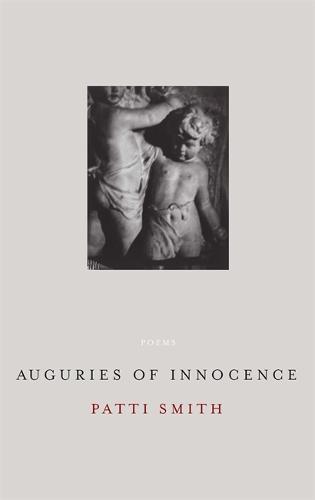 Auguries of Innocence is the first book of poetry from Patti Smith in more than a decade. It marks a major accomplishment from a poet and performer who has inscribed her vision of our world in powerful anthems, ballads, and lyrics. In this intimate and searing collection of poems, Smith joins in that great tradition of troubadours, journeymen, wordsmiths, and artists who respond to the world around them in fresh and original language. Her influences are eclectic and striking: Blake, Rimbaud, Picasso, Arbus, and Johnny Appleseed. Smith is an American original; her poems are oracles for our times. Smith curated the Meltdown Festival at the Royal Festival Hall in London, England during June 2005 - one of the most successful Meltdown Festivals ever held, with virtually every event sold out. The performers included Tilda Swinton, Miranda Richardson, London Sinfonietta, and Tuvan throat-singing group and Patti Smith singing her debut album Horses (album) in its entirety, the first time she has ever done so. This live performance was released as Horses Horses.