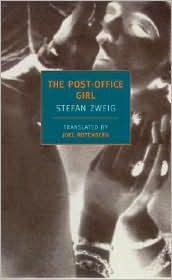 Wes Anderson on Stefan Zweig: I had never heard of Zweig…when I just more or less by chance bought a copy of Beware of Pity. I loved this first book. I also read the The Post-Office Girl. The Grand Budapest Hotel has elements that were sort of stolen from both these books. Two characters in our story are vaguely meant to represent Zweig himself – our Author character, played by Tom Wilkinson, and the theoretically fictionalised version of himself, played by Jude Law. But, in fact, M. Gustave, the main character who is played by Ralph Fiennes, is modelled significantly on Zweig as well. The post-office girl is Christine, who looks after her ailing mother and toils in a provincial Austrian post office in the years just after the Great War. One afternoon, as she is dozing among the official forms and stamps, a telegraph arrives addressed to her. It is from her rich aunt, who lives in America and writes requesting that Christine join her and her husband in a Swiss Alpine resort. After a dizzying train ride, Christine finds herself at the top of the world, enjoying a life of privilege that she had never imagined. But Christine’s aunt drops her as abruptly as she picked her up, and soon the young woman is back at the provincial post office, consumed with disappointment and bitterness. Then she meets Ferdinand, a wounded but eloquent war veteran who is able to give voice to the disaffection of his generation. Christine’s and Ferdinand’s lives spiral downward, before Ferdinand comes up with a plan which will be either their salvation or their doom. Never before published in English, this extraordinary book is an unexpected and haunting foray into noir fiction by one of the masters of the psychological novel.

END_OF_DOCUMENT_TOKEN_TO_BE_REPLACED

Journey Into the Past

After nine years of separation from his native country because of the First World War, Louis finally sets foot in Austria and meets the woman he had been in love with. Previously divided by class and wealth, both are now married,...

The post-office girl is Christine, who looks after her ailing mother and toils in a provincial Austrian post office in the years just after the Great War. One afternoon, as she is dozing among the official forms and stamps, a...

A young Austrian woman, Christine, toils away in a provincial post office when, out of the blue, a telegram arrives inviting her to join an American aunt she's never known in a fashionable Swiss resort. She accepts and is swept up...

Stefan Zweig's brilliant novel, Beware of Pity, is an original and powerful work. The New York Times Stefan Zweig was a master anatomist of the deceitful heart, and Beware of Pity uncovers the seed of selfishness within even the...