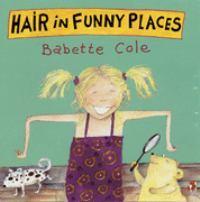 Girls and boys are always curious and even sometimes alarmed by the behaviour of their bodies as they grow up. Puberty being a particularly unsettling time, Babette Cole has made this the subject of the fifth title in her bestselling series of family dilemmas'. Who else but Babette would have the temerity to tackle this subject in a picture book and the genius to carry it off! In Hair in Funny Places her artwork is without exaggeration some of the best she has ever done- it is brilliant. The text which takes the form of a conversation between a small girl and her teddy bear is ingenious and funny -it is the behaviour of Mr and Mrs Hormone (wonderfully depicted) which is responsible for and plays havoc with both physical and emotional states of girls and boys between (roughly) the ages ofeight and eighteen. The book is bound to be controversial but Babette has never taken the conventional path and her readers love her for her outrageous approach to little mentioned topics.