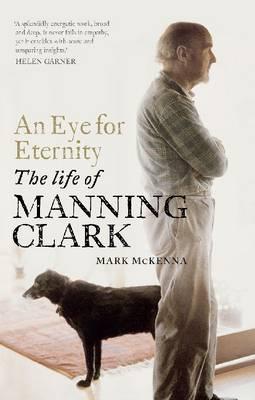 Manning Clark was a complex, demanding and brilliant man. Mark McKenna s compelling biography of this giant of Australia s cultural landscape is informed by his reading of Clark s extensive private letters, journals and diaries many that have never been read before. An Eye for Eternity paints a sweeping portrait of the man who gave Australians the signature account of their own history. It tells of his friendships with Patrick White and Sidney Nolan. It details an urgent and dynamic marriage, ripped apart at times by Clark s constant need for extramarital romantic love. A son who wrote letters to his dead parents. A historian who placed narrative ahead of facts. A doubter who flirted with Catholicism. A controversial public figure who marked slights and criticisms with deeply held grudges. To understand Clark s life is to understand twentieth century Australia. And it raises fundamental questions about the craft of biography. When are letters too personal, comments too hurtful and insights too private to publish? Clark incessantly documented his life-leaving notes to the biographers he knew would pursue his story. He had a deep need to be remembered and

END_OF_DOCUMENT_TOKEN_TO_BE_REPLACED

Manning Clark was a complex, demanding and brilliant man. Mark McKenna's compelling biography of this giant of Australia's cultural landscape is informed by his reading of Clark's extensive private letters, journals and diaries. A...

More than a decade in the writing, this is the authorised biography of Australia's most controversial historian.

A Short History of Australia

Captures Australia's social, cultural and political transformation through its many stages, and gives us a sense of our history, which is truly our very own.

The first in MUP Masterworks series, this work is a carefully selected extract from Manning Clark's seminal work, History of Australia . Its focus is the Gallipoli campaign and the terrible weeks in 1915 that saw the forging of...

Manning Clark was a complex, demanding and brilliant man. Mark McKenna's compelling biography of this giant of Australia's cultural landscape is informed by his reading of Clark's extensive private letters, journals and diaries. A...

Looking for Blackfellas' Point: An Australian History of Place

A history for every Australian who is interested in the story of settler-Australia's relations with Indigenous people - what happened between us, how we learnt to forget and, finally, how we came to confront the truth about our...

Justice: A History of the Aboriginal Legal Service of Western Australia