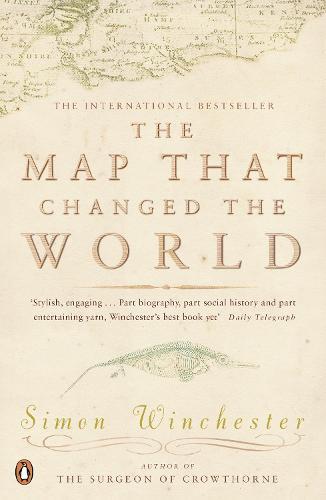 William Smith was not rich or well connected, but his passion for rocks and fossils, and his twenty-year obsession with single-handedly mapping the geology of Britain made him one of the most significant men of the nineteenth century. However his vision cost him dear - his wife went mad, his work was stolen by jealous colleagues who eventually ruined him, and he was imprisoned for debt.Simon Winchester tells the fascinating story of ‘Strata’ Smith, a man who crossed boundaries of class, wealth and science to produce a map that fundamentally changed the way we view the world.

END_OF_DOCUMENT_TOKEN_TO_BE_REPLACED

The Surgeon of Crowthorne: A Tale of Murder, Madness and the Oxford English Dictionary

A book about the making of the Oxford English Dictionary and the love of words. It tells of the relationship between the dictionary editor and one of its main contributors (they were all volunteers) who corresponded for 17 years...

Hidden behind velvet curtains above a stairway in a house in London's Piccadilly is an enormous and beautiful hand-coloured map - the first geological map of anywhere in the world. Its maker was a farmer's son named William Smith....

The Surgeon of Crowthorne: A Tale of Murder,Madness and the Oxford English Dictionary

Krakatoa: The Day the World Exploded

Chronicles the destruction of Indonesian island of Krakatoa in 1883. This book describes how one island and its inhabitants were blasted out of existence and how colonial society was turned upside-down in a cataclysm.