Ovid and the Fasti: An Historical Study 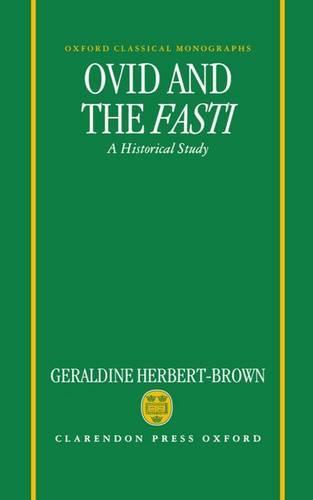 Ovid and the Fasti: An Historical Study

Despite the death of contemporary witnesses for the late Augustan and early Tiberian Principates, Ovid’s Fasti has remained curiously neglected as an historical source for the period. The aim of this new research is to show that the poem of some five thousand lines on the Roman calendar, written and revised in the years between AD 4-16, provides students of the Augustan age with a wealth of information, both about the author himself, and about his cultural and political environment. The author discovers important new insights into the way in which Augustus and his family were incorporated into the ancient religion of the city of Rome, and reveals Ovid as a unique contemporary witness of the last decade of Augustus' life and the first years of Tiberius' rule. From his poem the Fasti, Dr Herbert-Brown finds new evidence of the processes which marked the transition from the Republic to Empire.