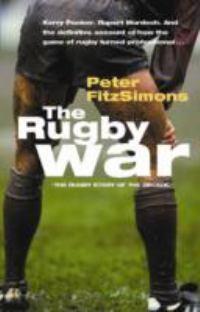 the principal soldiers were all men to rugby born - players, coaches, officials and business executives. Yet the Rugby War goes far beyond football. An updated edition to coincide with the 2003 Rugby World Cup. Bestselling author and Sydney Morning Herald journalist Peter FitzSimons takes us to the very heart of the battle which evolved from the continuing friction between the business empires of Rupert Murdoch and Kerry Packer. From the first wisps of smoke that appeared in a boardroom in Sydney, a War suddenly ignited around the world. Some of the game’s greatest players, including the captains of Australia, New Zealand and South Africa, came to place their trust in a small group of men with an alternative vision to the establishment’s - men who were backed by Kerry Packer. Peter FitzSimons details the consequences of this change, one of which would see the sport abandoning a commitment to amateurism which had survived more that 100 years. Bruising, bloodied and bitter, no one knew just how close the Rugby War came to having an entirely different result.