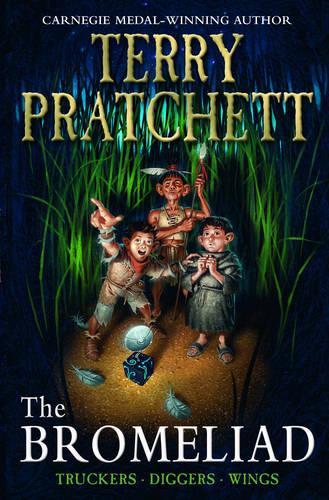 Truckers . Diggers . WingsTo the thousands of tiny nomes living under the floorboards of a large department Store, there is no Outside. No Day or Night, no Sun or Rain. They’re just daft old legends. Until they hear the devastating news that the Store is to be demolished …

When you are tiny, less than 10cm small, and you have spent your entire life living as comfortably as generations before you in the walls and floors of a large department store, you might be forgiven for thinking the store was all that ever existed. If a small group of nomes appeared out of nowhere claiming to come from ‘Outside’, it might be understandable for you to want to deny they exist even while they stand in front of you. But if they claimed the store was going to be demolished and they brought evidence, you might want to stop squabbling and start working together. For the sake of Nomekind.

While The Bromeliad trilogy is full of little Easter eggs for its adult readers (there is a wonderful reference to some Nina Simone lyrics in the first one!) these are never at the expense of the series’ intended audience. The Bromeliad trilogy is full of young people pushing for the change that will save them and stubborn old folk refusing to accept it until the very last minute (though if you listen to their grumbling carefully some of what they’re saying is quite useful!). I had such a ball re-reading it, it was a joy to rediscover the Book of Nome (a Nomish bible which asserts that Outside is a myth) and to laugh at the silliness of nomish politics, which are not dissimilar to our own! The huge variety of characters and their witty dialogue make The Bromeliad trilogy an excellent read-aloud bedtime story that everyone can enjoy! Great for 6+ (if being read to!)