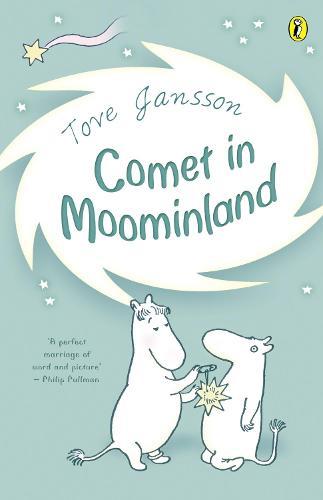 How I wish I had been introduced to these stories as a child, but unfortunately for me, they were not widely known in Australia in the 90s.

The Moomins are a lovely, whimsical family created by Tove Jansson (1914-2001), a Finnish author and illustrator of the country’s Swedish-speaking minority who produced numerous works for children and adults. Comet in Moominland is actually her second book about the Moomins, her first being The Moomins and the Great Flood, which was the last to be translated into English. Comet in Moominland serves well as the introductory book to these characters, however, as it presents the family and their friends afresh.

The story does, I suppose, deal with some darker issues, such as the comet that is fast approaching (and will destroy) the idyllic Moominvalley, where these happy creatures live. Rather than being bleak or depressing, though, these themes are handled with joviality and sweetness.

The creativity of these books is brilliant. They are as thrilling to me as an adult as I know they are to seven to 11-year-olds. I have even tried and tested them on a group of eight-year-olds while working as a counsellor at a summer camp in Canada. My campers would beg me every night to read them another chapter about Moomintroll and his family.

George Munn is a bookseller at Readings Hawthorn.

END_OF_DOCUMENT_TOKEN_TO_BE_REPLACED

The Exploits of Moominpappa